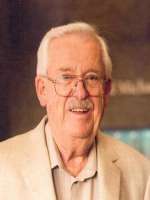 Richard William Schuff, “Dick” passed away July 28, 2012 at Coronado House of Hospice of the Valley. Dick was born February 12, 1929 in Columbus, Ohio to the late Albert and Ruth Schuff. He moved to Arizona in 1945. Upon graduating from North Phoenix High School he attended the University of Arizona prior to enlisting in the United States Navy where he served during the Korean War. Upon discharge from the Navy he attended Arizona State University and was always an optimistic ASU football fan. Dick loved the steel business and had his hand in many phases of the construction industry in Arizona. His final employment was with Schuff Steel Company where he worked developing solar energy projects. He was a Life Member of the Phoenicians. Dick was preceded in death by his sister, Mary Ann Crompton. He is survived by his wife of 58 years, Ginger, his sons Sky (Kathy), Randy, and his granddaughter Francine, his brother Dave (Nancy) and sister Sandy Bear (John) and many nieces and nephews. Services will be held at 11:00 AM, August 9, 2012 at All Saints Episcopal Church, 6300 N. Central Avenue, Phoenix, AZ 85012. In lieu of flowers, donations may be made in Dick’s honor to All Saints Episcopal Church or Hospice of the Valley, 1510 E. Flower Street, Phoenix, AZ 85014.

Offer Hugs From Home Condolence for the family of SCHUFF, RICHARD WILLIAM