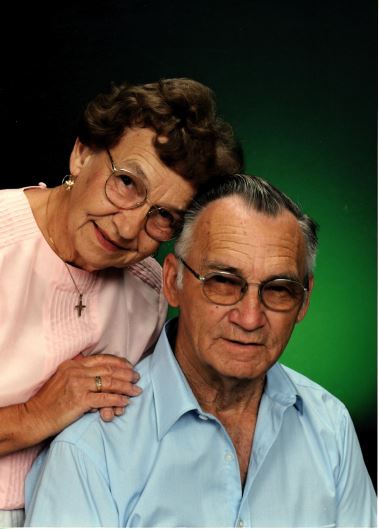 Schulte, Andrew F., 91 of Phoenix, AZ passed away peacefully on June 8th, 2019. Andrew was originally a farmer for many years in Waukon IA where he raised a large family. He and his wife relocated to Arizona in 1986 where he became a paint contractor until he retired. He enjoyed road trips and spending time with his family. He is preceded in death by his wife Mabel of 55 years; parents Andrew and Catherine; and brothers, James, Kenneth, Ralph and Robert. He is survived by his children, Charles (Suzanne), Gary (Dema), Michael (Denise), Andrew, Patrick, Kathy (Stacy), Anita (Lou), Thomas (Lisa), Raymond, Regina (Michael) and Sarah (JD); 26 grandchildren, 24 great-grandchildren, sister Kathryn and brothers Donald and Gregory.
There will be a viewing and rosary from 5:00-8:00 P.M. on Wednesday, June 12, 2019 at the Whitney & Murphy Funeral Home, 4800 E. Indian School Road, Phoenix.
Funeral Mass will be celebrated at St. Theresa Catholic Church, 5045 E. Thomas Road, Phoenix, on Thursday, June 13, 2019 at 10:00 A.M., followed by interment ceremony at St. Francis Cemetery and reception afterwards. Condolences may be expressed at www.whitneymurphyfuneralhome.com

Offer Hugs From Home Condolence for the family of SCHULTE, ANDREW F.