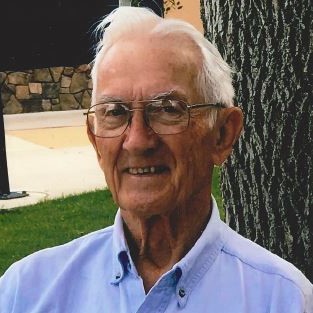 Anthony “Tony” Valentine Schwan passed away peacefully on July 9, 2019, in Scottsdale, Arizona. Tony was born August 30, 1931 in Aberdeen, South Dakota to Joseph Anton Schwan and Magdalena Martha Richter. Siblings include (Eva, Clementine, Ida, and Richard, all deceased) his brother Joseph P. Schwan and his sister Angeline. Tony grew up working alongside his father to help provide for the family and explored the South Dakota outdoors at every opportunity.
Tony attended St. Mary’s Catholic Elementary School and Aberdeen Central High School, where his passion and love for math began. He obtained a graduate degree in Structural Engineering from Illinois Institute of Technology. It was there he met and fell in love with his beloved wife, Barbara Joan Mason, and soon married in Aberdeen. The couple made Chicago their home while Tony began his Professional Engineering career. It was there that 3 of his 6 children were born; Nadine, Christine and Anthony. Shortly thereafter, the family decided to move west.
Upon settling in Phoenix, Arizona in 1959, Tony & Barbara added 3 more children to their household; Stephen, Peter & Marguerite. Having watched his father work hard and make sacrifices for his family, Tony followed his lead and worked hard to establish his own Structural firm. His company grew into a very well-respected Engineering Firm where he always put the client’s needs and interests first. Tony was very active in volunteering for the church, both at St. Theresa Catholic Church and for the Catholic Diocese of Phoenix as Building Committee Chairman. He served his Family and the Lord throughout his life.
Tony is survived by his wife Barbara, his six children, 15 grandchildren, and 11 greatgrandchildren. In addition, older brother Joseph Schwan and his younger sister Angeline Schwan.
Family was the most important for Tony and he continuously strived to provide them with opportunity, love, passion, courage and family strength; providing a solid foundation for his family to grow.
He will be dearly missed.
May Tony’s soul rest in Peace.
A Funeral Mass will be held at St. Mary’s Catholic Church in Aberdeen, South Dakota on August 10, 2019.

Offer Hugs From Home Condolence for the family of SCHWAN, ANTHONY VALENTINE