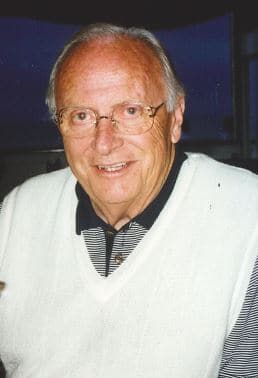 Zel was born in Kansas City, Missouri, August 7, 1928, and was an orphan for the first 11 months of his life. He was adopted by Carl and Ruby Schwanz and spent his first seven years on the family farm in Maxwell, Nebraska. The family moved to Camas, Washington, in 1935, where he spent the remainder of his happy childhood.

During World War II, Zel borrowed $56 from his father and acquired a Union card to work at a shipyard that specialized in building hospital ships. The Schwanz family then moved to Phoenix, Arizona, in 1946. Zel attended North Phoenix High School and Phoenix College. In 1950, Zel joined the United States Coast Guard and served three years stationed in San Francisco, California.

Zel had a successful business career where mixing, building relationships and selling were the order of the day for six decades. He would sell fence products, office machines for Remington Rand Corporation and own and market the Gregg Business College in his long career.

In 1967, Zel began his career with IDS in the insurance industry, and he never looked back. He was associated throughout the years with Cal-Western, Bankers Life of Iowa/The Principal Financial Group, and Brown and Brown Insurance.

In 1955, Zel married Mary Lou Young in her hometown Minneapolis, Minnesota. They started life in a two-bedroom apartment at 15th Avenue and Indian School Road. In 1959, they moved to Scottsdale, Arizona, and raised their five children. Sadly, Mary Lou passed away in 1974.

In 1978, Zel married Nancy Little and welcomed three stepchildren, Shari, David, and Linda, into his life. Nancy sadly passed away in February 2020.

Zel is preceded in death by his two wives, parents, brother Mel Schwanz, two step grandsons (Zachary and Chandler), and a host of dear friends.

I lieu of flowers the family ask donations to be made to the Boys and Girls Club of Greater Scottsdale or Kindles for Kids Phoenix Children’s Hospital.

Offer Hugs From Home Condolence for the family of SCHWANZ, RUTHERFORD DALE