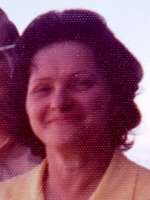 was born July 2, 1923 in Clarkrange, Tennessee, a  decendent of first Tennessee Governor John Sevier.  As a young wife she followed her husband Harry D. Schwartz on their first adventure to Alaska from Dayton, Ohio in 1946.  From that time they raised their family from a homestead near Anchorage to Seward, and then later Seldovia, Anchorage again, and finally Dillingham, Alaska.  While husband Harry served in law enforcement, Jewell’s career was in banking as an associate, then as a department manager.  The couple raised six children, three of whom remained in Alaska.  Jewell passed away February 24, 2013 in Phoenix, Arizona and is survived by her remaining immediate family, daughters Anita Parker and Marianne Schwartz of Phoenix, daughters Janice Knight and Cathy Kincaid of Anchorage, son Hank Schwartz of Wichita, sister, Jean Underwood of Farmington and grandchildren and great-grandchildren, nephews and nieces throughout the United States.  Memorial Service will be held March 10, 2013 at 2 pm St. Stephen’s Episcopal Church at 56th Street and Oak in Phoenix.

Offer Hugs From Home Condolence for the family of SCHWARTZ, JEWELL HELEN LITTLE