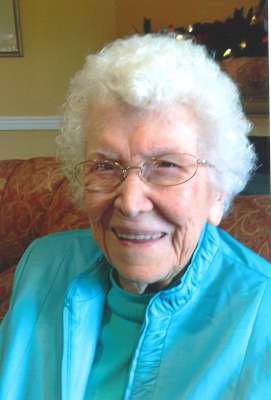 Mary Margaret was the first of nine children born to Joseph and Margaret Fallon in 1920 in Pittsburgh, PA. She lived almost 96 years, passing away on February 22, 2016. She grew up in Pittsburgh and graduated from Annunciation High School. She met the love of her life, Charles Joseph Schweikert, and they were married on June 6, 1942 at Holy Innocents Catholic Church in Sheridan, PA.  Marge and Chuck had six children, the first three born in Pittsburgh. After WWII they moved their young family to Phoenix, Arizona to join her parents and other siblings and to start a life out west. Marge and Chuck were founding parishioners of St. Theresa Catholic Church in Phoenix, AZ.  Marge served in many capacities and was active in the Sodality and Christ Child Society. Her favorite hobby was sewing which she began when she was 8 years old.  She sewed everything from her wedding dress to tiny baby clothes and everything in between. She enjoyed knitting, needlepoint and ceramics. She lived a full life, raising her children, taking pride in their accomplishments, and joyfully celebrated the birth of each grandchild and great grandchild. Marge was loving, gracious, caring and giving of herself to anyone in need. Marge had a beautiful smile and a strong spirit. She was a true servant to the Lord. She is predeceased by her parents and siblings Dolores, Jean, Jane and Bill and her husband Chuck, and son Tom. She is survived by her children Jack (Betty), Mary Ann Goodwin (Jeff), Peggy Melzer (Hank), Paul (Carmen), Jim, and daughter-in-law Liz; grandchildren John (April) and Dan Schweikert, David (Lindsey) and Sarah Goodwin, Lisa (Daryle) Hawes, Rob Melzer, Jeff (Cindy) and Lynn Schweikert, Cathy Slawson, Heidi Perkins, Andy Schweikert, Heather (Jason) Moore and Kristy Cochell; 14 great grandchildren; her sisters Helen Weller, Sister Irene Fallon, S.C., Joan (Jerry) Ferrera, brother Joe (Lila) Fallon, sister-in-law June Fallon; and numerous nieces and nephews. Friends may call at Whitney & Murphy Funeral Home, 4800 E. Indian School Road, Phoenix, on Sunday, February 28, 2016 from 3:00 – 5:00 PM, with a Scripture Service at 4:00 PM. Funeral Mass will take place at 12:00 PM, Monday, February 29, 2016 at St. Theresa Catholic Church, 5045 E. Thomas Road, Phoenix. Interment will follow at St. Francis Catholic Cemetery. In lieu of flowers donations may be made to Christ Child Society, 4633 N. 54th Street, Phoenix, AZ 85018 or St. Vincent de Paul Society, P. O. Box 13600, Phoenix, AZ 85002.

Offer Hugs From Home Condolence for the family of SCHWEIKERT, MARGE (FALLON)