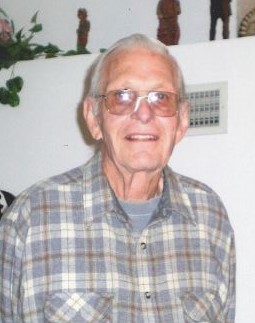 Joseph F. Seivert, 91, of Phoenix, passed away peacefully at home on January 20, 2019. He was born to Frank and Agnes Seivert in Colorado Springs, CO, on February 26, 1927, and moved to Phoenix at the age of 3. He attended St. Mary’s High School and served in the U.S. Navy at the age of 17, where he fought in World War II. He was a journeyman plumber by trade and a lifetime member of Local 469. He was married to Nancy Tengen for 51 years, and they had six children. He is preceded in death by his wife Nancy, daughter Theresa (Joe) Hunter and Maureen Seivert, brother George and sister Mary Agnes (Jim) McPeak. He is survived by daughters Carol (Alan) Garvin, Kathleen (Larry) Longshore, and sons Brian Seivert and Tim (Alexandra) Seivert, 6 grandchildren and 5 great grandchildren. A Visitation will be held on Sunday, January 27, 2019 from 5:00 P.M. – 8:00 P.M. with a Rosary at 7:00 P.M. at Whitney & Murphy Funeral Home, 4800 E. Indian School Road, Phoenix. Funeral Mass will be celebrated on Monday, January 28, 2019 at 10:00 A.M. at St. Paul’s Catholic Church, 330 W. Coral Gables Drive, Phoenix. A reception will follow. A Private Interment will be held on Tuesday, January 29, 2019 at the National Memorial Cemetery of Arizona, 23029 N Cave Creek Road, Phoenix.

Offer Condolence for the family of SEIVERT, JOSEPH F.