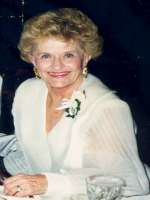 87, of Scottsdale, AZ passed away on September 12, 2010 at home, peacefully in the company of her family. Martha was born on January 31, 1923 in Ruzomberok, Czechoslovakia. She arrived in the USA with her parents Mike and Esther Letko on December 11, 1928. Martha was preceded in death by her parents and hr husband of 61 years, Lundy Sepiol. She is survived by her three children, son Michael (Linda) and daughters Kathy Riebe (Dennis) and Diane Poteet (Robert). She also has 8 grandchildren and 15 great-grandchildren. Martha and her family moved to Arizona in 1954. She was a very outgoing and energetic person, always involved in every activity that was taking place with her family and friends. “GG” was the true matriarch of her family and was dearly loved and cherished by all. Visitation will be held from 5:00-8:00 PM. with a Rosary at 7:00 PM, Tuesday, September 14, 2010 at Whitney & Murphy Funeral Home, 4800 E. Indian School Road, Phoenix, AZ. A Memorial Mass to celebrate her life will be held at 10:00 AM, Wednesday, September 15, 2010 at The Blessed Sacrament Catholic Church, 11300 North 64th Street, Scottsdale. The family requests that in lieu of flowers donations be made to Blessed Sacrament Catholic Church or the Alzheimer’s Association, 1028 E. McDowell Road, Phoenix, AZ 85006.

Offer Hugs From Home Condolence for the family of SEPIOL, MARTHA M