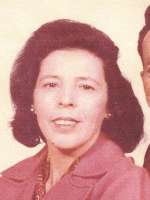 Beloved mother, grandmother, great-grandmother, sister, aunt, cousin and friend passed away peacefully on March 2, 2012. Mary was born on August 9, 1924 in Globe, AZ to Catalina and Irenio Duarte. She was preceded in death by her husband of 55 years Richard. Maria Leonor Duarte and Richard Serino married on November 1, 1945 in Nogales, AZ where their two children, Cecilia and Eddie were born. In the early 1950’s Richard was transferred to Phoenix where they resided until their passing. Mary was also preceded in death by her two brothers Manuel and Ramon Duarte and her younger sister Amalia Juarez of California. Mary is survived by two children Cecilia Martin and Eddie Serino, grandsons Daniel Richard Martin, Stephen Travis Martin (Felicia), five great-grandchildren: Daniel, Sabrina, Jenna, DuJuan, and Daylan. She also is survived by numerous nieces, nephews, in-laws and friends. Mary was a housekeeper for most of her working life, however what she was most proud of was one of her early jobs where she worked for the government as a seamstress making uniforms for American GI’s. Her husband Richard, an Army Veteran, received a Purple Heart and 2 Bronze Battle Stars during his WWII service. Mary is safely with God now and will be dearly missed by everyone whose life she touched. Visitation will be from 5-8pm with a Rosary at 7pm, Thursday, March 8 at Whitney & Murphy Funeral Home, 4800 E. Indian School Road. Funeral Mass will be at 11am, Friday, March 9 at St. Gregory Catholic Church, 3424 N. 18th Avenue, Phoenix, followed by a reception at the church. Interment will follow with a Graveside Service at St. Francis Catholic Cemetery, 2033 N. 48th Street, Phoenix. The memory of our mother’s kind, gentle and loving nature will forever live in our hearts. We love you, Mother. Vaya con Dios. Family requests any donations to Hospice of theValley, 1510 E. Flower Street, Phoenix, AZ 85014.

Offer Hugs From Home Condolence for the family of SERINO, MARIA L. “Mary”