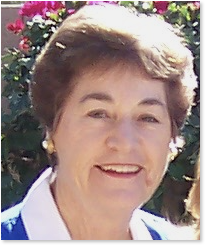 Ifigenia “Jean” Sgouros passed away peacefully on March 20, 2018 in Scottsdale, Arizona at the age of 80. She was born in Megalopolis, Greece in 1937, immigrated to the United States in 1952 and joined in marriage to John Sgouros in 1965 in Chicago. She loved being surrounded by her family and helped raise her three grandchildren. Through her life she worked within local school systems and was devoted to starting and helping multiple Greek Orthodox Churches. Jean was very active in the Greek Orthodox community, was a member of St. Katherine’s Philoptochos organization and loved to bake and did so not only for her family but for many years at various local Greek Festivals. She also loved chanting during vesper services as one of her most favorite chants was the “”Άσπιλε” to the Theotokos during Great Lent. She spent her free time reading her Bible and theological books, taking long walks, working out at the gym, attending her grandchildren’s activities and watching “Wheel of Fortune” and “Jeopardy” on a daily basis. She is survived by her husband John Sgouros, her son George Sgouros (Traci), her three grandchildren, Jonathan, Zoe and Gianna, her brother John Arvanetes (Barbara), sister Vasiliki Kotsogiannis, sister Nicki Papanikolaou (Nicholas) and many nieces and nephews. She was preceded in death by her Father, Demetrios; Mother, Amalia; Twin Sister, Katina Arvanetes and Sister, Ioanna Stavrianos. Visitation will be held on Tuesday, March 27th from 5:00-8:00 PM with the Trisagion Service at 7:00 PM and Funeral Services on Wednesday March 28th at 10:00 AM both at Holy Trinity Greek Orthodox Cathedral, 1973 E. Maryland Avenue, Phoenix, AZ. MAY HER MEMORY BE ETERNAL! Interment Paradise Memorial Gardens. In lieu of flowers, the family requests memorial contributions be made to Holy Trinity Greek Orthodox Cathedral, Phoenix, AZ or to St. Haralambos Greek Orthodox Church, Peoria, AZ. Arrangements entrusted to Whitney & Murphy Funeral Home.

Offer Hugs From Home Condolence for the family of SGOUROS, IFIGENIA “JEAN”