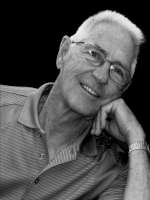 Ellis passed away on Thursday, January 10, 2013 in the comfort of his home with his wife Sally at his side and his children, brother and grandchildren circled around him. Ellis was a man who lived his life and touched the lives of others through his actions more than his words.  He was a man of example, speaking his loudest by doing, a man who was always there for his family and friends, whose example of integrity and character exemplify how to live a life that matters.  Ellis walked his path illuminated by God’s grace with humility and modesty.  He was the salt of the earth, connecting with people from all walks of life with great interest and respect. Ellis was a native Phoenician, born February 17, 1931 at Good Samaritan hospital and was raised in the now historic Ellis-Shackelford House at 1242 N. Central Ave.  He attended Kenilworth Grade School, Phoenix Union High School, Arizona State University and received his DDS from Indiana University.  He served as a Captain in the Dental Core of the Air Force and as a 3rd generation dentist he practiced in the valley for 37 years in the same office he and his father opened in 1956.  Although dentistry was his profession, he spent a great deal of time enjoying his passions and hobbies; gardening, RVing, traveling, stained glass, mechanics, and wood working and never passed up a party.  He loved that he and Sally visited all 50 states, 49 of them in their motorhome.  A true renascence man, he knew a great deal about many different things and always had his hands dirty.  He could fix just about anything and never threw anything away.  He took great pride in teaching his children and grandchildren about the world and he directly influenced and mentored the careers of 3 of his grandchildren, a master auto technician, a landscape designer, and an upcoming dentist. Ellis is survived by his wife of almost 60 years Sally, daughter Sue Anne (Mike Spahle), son Brian James (Missy),  brother Jim, grandchildren Brad (Melissa), Tanner, Daniel, Audra (Scott), Amy, and Austin, Matt, Nick (Danielle) and Julia, great grandchildren, Emma and Mason. A Celebration of Ellis’ life will be held on Saturday, January 19, at 11:00am at Shepherd of the Hills Congregational Church, 5524 E. Lafayette Blvd., Phoenix, AZ 85018. In lieu of flowers, donations to Hospice of the Valley, 1510 E. Flower Street, Phoenix, AZ 85014 are greatly appreciated.

Offer Hugs From Home Condolence for the family of SHACKELFORD, ELLIS MARTIN