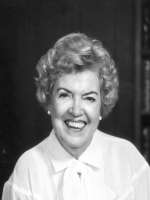 Dr. Dorothy Anne Shaffer was born on April 13, 1916 and passed away on December 31, 2010. She was the daughter of Anna and Ned Welch of Boston, Massachusetts. She graduated from Mary Frances Rooney’s School of Speech and Drama. In 1942 she married Ralph (Weldoni) Shaffer, her life-long helpmate for over 60 years. In Massachusetts, Dorothy established her private kindergarten as owner/director. After relocating to Phoenix in 1961, Dorothy taught speech improvement in the Cartwright and Madison School districts. She received her MA and PhD from ASU and authored several books on speech and non-verbal communication and lectured nationally for the National Speakers Association. She was outgoing and had a great sense of humor that she shared with all encounters. She enjoyed many friendships over the years as well as the joy of her family. Dorothy is pre-deceased by Ralph W. Shaffer and her sisters, Genie Baumann and Pat McCartney. Her children Ginny Fields (Gary), Bob Shaffer (Sheila). Richard Shaffer and Patty Madden (Ken) and her grandchildren, Kevin, Sean, Anna, Athena, Elizabeth and Deborah and several nieces and nephews wish her Godspeed with love. Funeral Service will be at 10:00 am, Thursday, January 6, 2011 at the Life Center of the Beatitudes Campus, 1616 W. Glendale Avenue, Phoenix.

Offer Hugs From Home Condolence for the family of SHAFFER, DOROTHY ANNE