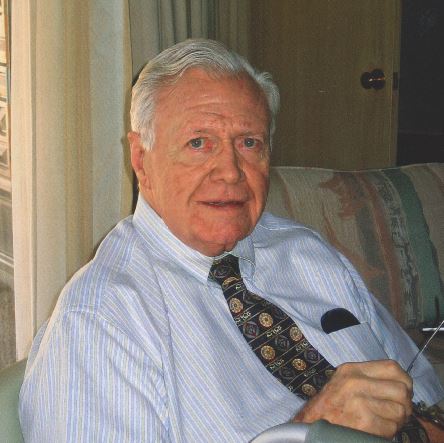 Daniel Francis Shanahan, M.D., 88, turned in a boarding pass for the last time on Friday, March 1 and flew home to his Heavenly Father.
Dan was born on April 24, 1930 to Dr. Daniel and Cecelia (Freeman) Shanahan in Waterbury, Connecticut. After graduating from Sacred Heart High School, he headed west to do his undergraduate work at the University of Arizona. He then pursued a medical degree at Creighton University in Omaha, Nebraska. He interned at St. Joseph’s hospital in Phoenix and made two important decisions at that time. First, he would limit his future practice to dermatology, which fascinated him, and secondly, he came to love life in the Southwest and would become a “desert dweller”. He completed his residency at the University of Minnesota with a rotation at the Mayo Clinic in Rochester. While in Minnesota, in order of importance he met his future wife and the love of his life, Lois Bartscher of St. Paul, and since he loved flying, he obtained a pilot’s license. His final step on the path to establishing family and career was his two years of service as a captain in the Air Force. He liked to stress that it was the United States Air Force.
It was time to get serious, and Dan did by starting a 40 year dermatology practice, which he loved, with offices in Phoenix and Sun City, AZ. He served on the Maricopa County Board of Health, the Maricopa County Medical Society and the boards of the Phoenix Dermatologic Society, the Sonoran Dermatological Society and the Pacific Dermatologic Association. He taught residents in the Good Samaritan Family Hospital Practice program and was often asked to speak at medical conferences. He provided care to the clergy and religious of the Diocese of Phoenix, the Mercy Clinic at St. Joseph Hospital, and the Little Sisters of the Poor, and he was a generous supporter of the Society of St. Vincent de Paul, Catholic education, and many charitable causes.
Daniel loved flying, cooking, and traveling. Feeling the responsibility of family, he abandoned the flying hobby along the way, explaining that he preferred “to be seen here, rather than in the hereafter”. He replaced flying with photography with some results that were quite good. He framed them for display in his office, although the exhibit was never opened to the public. He was a master chef whose sautéed chicken livers are the stuff of legend, and he hosted wonderful parties that were enjoyed by all (even the fondue parties, which frequently ended with emergency room trips to remove wayward fondue forks). Because Dan was an avid traveler, the family enjoyed many family vacations, including a fantastic Bicentennial trip in 1976. He was very proud of his Irish heritage, and one of his greatest enjoyments was taking his family to Ireland for an entire summer while he was on a sabbatical so they would feel their roots while he discovered his. He and Lois were lucky enough to find some quiet time for themselves.
His five fantastic children, four grandchildren of whom he was so proud, and wife Lois have each other for comfort. They are son Joseph Timothy (daughter Caitlin), daughter Dr. Catherine Mary Shanahan (a.k.a. Carrie), son Daniel Francis III (daughter Ceara), daughter Colleen Anne (husband Dr. Brian Bock, children Sean Thomas and Genevieve Catherine), and daughter Genevieve Cecelia Shanahan (husband Bryan Jackson). He is also survived by his brother, Dr. Richard Shanahan (wife Margaret) of Naugatuck, Connecticut and their five children (Dan’s nieces and nephew) and grandchildren, and by his brother-in-law, Lois J. Bartscher (wife Mary Frances) of Woodbury, Minnesota. Dan also leaves dozens of Irish cousins scattered throughout the U.S. who will doubtless have toasted him on St. Patrick’s Day.
The family is very grateful to the caregivers at Hospice of the Valley and to Paula, Dimitriou, Keisha, Stacey, Tanika, Dorian, and Ileana. A funeral service was held on March 18, 2019 at St. Theresa Catholic Church with private burial at St. Francis Cemetery. Tributes to honor Dr. Shanahan may be made to the Society of St. Vincent de Paul or the organization of your choice.
Dan was a quiet, generous, good-hearted man. Danny Boy, our hearts are broken – we love you so!
We can never thank you enough for your love and for the memories. Dan leaves us with this final thought to ponder: It’s not the cough that carries you off – it’s the coffin they carry you off in.

Offer Hugs From Home Condolence for the family of SHANAHAN, DANIEL FRANCIS