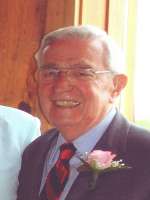 Robert J. Sheahan, 79, died on Wednesday, February 17, 2010, in Scottsdale, surrounded by the love of his family and in the care of Hospice of the Valley. Born in Chicago he moved to Phoenix and was a 58-yr. resident of the Valley and always an active member of his Church and community. He was a financial and estate planner held in high regard by his peers and his clients. He was credentialed as a CLU, CFP,CHFC. He was a Knight of Columbus for over 45 years, and over the years served in many capacities in the Catholic Church as a member of the Catholic Community Foundation, Diocesan School Board, Parish Council of St. Daniel’s and St. Theresa’s, among others. He held many leadership positions in his professional societies serving CLU and sitting on NASD boards. His deep faith in Christ and his love of his family guided him all of his life. He was active in schools and activities of his children, and he and his deceased wife Margot established a support group for the grieving and bereaved at St. Theresa’s Church. He was very proud of his family, of the work he did for others and on behalf of others. He was predeceased by his parents, his first wife, Margot, in 2005 and his eldest son, Michael, in 1979. He is survived by his brother William Sheahan of Chicago, his sister Maribeth Lamparski of Chicago, his son Matthew Sheahan (Lucy) of Sacramento, his daughter Mary McAllister (Keith) of Phoenix, his second wife Jane Olney Sheahan of Phoenix, and his much-beloved grandchildren Daniel, Mary Catherine, Caroline, Michael and Kevin Sheahan, and Martin (Michelle), Michael, Mark, Matthew, and Kaitlin McAllister, plus great-grandchildren Jason and one soon to be born. He will also be missed by many nieces, nephews, friends and business associates. It was a privilege to be counted as his friend. Bob was a man of the highest integrity, great honesty, strong moral and ethical beliefs, and noted for his great love of God and family. A visitation will be held Monday Feb.22 from 5 to 8 PM at Whitney-Murphy Arcadia Funeral Home, 48th st E. Indian School Road. Mass of the Resurrection will be celebrated at 10 AM Tuesday at St. Theresa’s Catholic Church, 50th st E. Thomas Road, Phoenix, with a reception to follow at the Church. Interment at St. Francis Cemetery. In gratitude for the beautiful care he received at Hospice of the Valley, contributions to them would be appreciated.

Offer Hugs From Home Condolence for the family of SHEAHAN, ROBERT