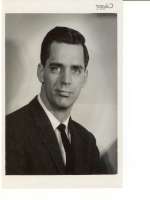 79 passed on March 13th, 2010. Bill probably didn’t look at the calendar that morning to notice the date; as the number 13 would follow him through basketball and football in high school and in college. Bill was able to watch his grandson Ryan play football and had just learned that he had made the baseball team. Bill will be remembered for many things, his dry wit, cunning mind and sense of humor, love of music; especially the jazz era and Frank Sinatra. Bill raised his daughters to appreciate all types of music and they grew up listening to not just the melody but the lyrics and how Mr. Sinatra could sing. Bill could entertain for hours with stories about his time on the railroad in Chicago and growing up in Indiana. Bill, in retirement, was a writer, he loved to sit at his typewriter and create. He enjoyed sharing his stories with family and friends and sending them to his good friend Marjorie for her review and then the joy of being published. Grandpa Bill enjoyed being his granddaughter Mackenzie’s pen-pal and would read the letters to daughter Julie and laugh until he couldn’t breathe. Bill was here to see his brother Clarence, sisters; Dorothy, Mary Jane and Wanda; his parents; Virgil and Ollie, daughter Laurie and ex-wife Bonnie all pass before him. Bill is survived by his daughter Julie Shelton-Schroth (Michael), grandson Ryan Joseph Parker (son of Laurie) son, Timothy Tarpening (Leslie) and grandchildren Kylie, Dylan and Mackenzie, niece Derinda Holmes-Grinolds and nephew Billy Jack Holmes. Dad loved being a father, grand-father and uncle. He was so proud of all of us.

Offer Hugs From Home Condolence for the family of SHELTON, Bill Zane