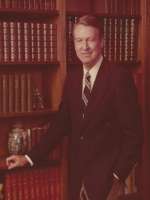 Jim was born on November 9, 1924 to Pat Herndon and Grace Sweeney Simmons in Wichita Falls, Texas.

He attended Wichita Falls High School, New Mexico Military Institute, University of New Mexico, and received his MBA from the Harvard Business School in 1947. He served as Lt. (jg) in the U.S. Navy from 1943-1946.

At 26, he became Executive V.P. and CEO, First State Bank, Monahans, Texas. He then served as President and CEO, Commercial Bank and Trust Company, Midland, Texas. In 1959, he moved to Arizona to become the Founding President of Guaranty Bank, predecessor of United Bank of Arizona. Jim served as Chairman and CEO of United Bank until 1988. He then became Chairman and CEO of the Valley National Bank until his retirement in 1990.

Special thanks go to Dr. Robert Spetzler and Virginia Prendergast, both of Barrow Neurological Institute.

Offer Hugs From Home Condolence for the family of SIMMONS, JAMES PAT