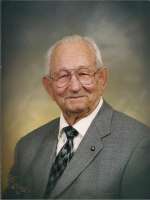 86, of Peoria, AZ passed away peacefully on November 28th, 2009. He was born in Washington, IN on May 12th, 1923. Leo was trained as a paratrooper in the U. S. Marine Corps. He served as a Corporal during WWII, was wounded in action on Iwo Jima and was awarded the Purple Heart and the Bronze Star. Leo moved his family to Phoenix, AZ in l960. Leo retired after 42 years of dedicated service to the Painters Local 86. A beloved husband and father, he is survived by his loving wife of 62 years, Jackie; six children; David, (Dianna), Deborah Gardner, Gail Caretto (Mark), Daniel, Gloria Johnston, and Edward (Janice), 15 grandchildren and 14 great grandchildren who will miss him dearly. A Memorial Service will be held at 10:00 A.M., Tuesday, December 29, 2009 at Ss. Simon and Jude Cathedral, 6351 N. 27th Avenue, Phoenix. Interment at 1:30 pm, Tuesday, December 29, 2009 at the National Memorial Cemetery of AZ.

Offer Hugs From Home Condolence for the family of SIMPSON, LEO