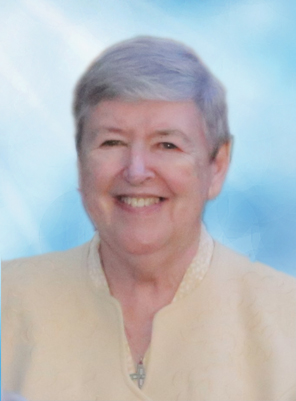 Sister Christine (Marie) Gilsenan, I.B.V.M., was born in Trim, County Meath, Ireland. In 1954 she entered the Loreto Convent at Navan, County Meath, becoming a Loreto Sister. She came to SS. Simon & Jude Parish, Phoenix, in 1957. She was an excellent educator, influencing the lives of thousands of students during her time in the classroom, spending most of her years at SS. Simon & Jude School. She also served at St. Jerome School, Phoenix, Sacred Heart School in Prescott and St. Mary’s (now San Francisco de Asis) in Flagstaff.
She taught all subjects skillfully, but Music was her passion. She taught her students music appreciation and gave them a great love for classical music, religious music and just fun music, too, all with her special musical flair, accompanying songs on piano or guitar.
Sister Christine also introduced generations of students to the visual arts by bringing to SS. Simon & Jude School the Phoenix Art Museum’s Art Masterpiece Program. This much-loved program continues today through volunteer parents who carry on the work Sr. Christine began many years ago.
Sister Christine always brought great joy to guests at the convent when she sat down at the piano and played any song requested! A spontaneous sing-along always completed the party!
Sister Christine received her BA degree at the University of San Diego and did further studies in Theology and Ignatian Spirituality at St. Louis University. She served as a novice director and also served in other leadership roles for her Religious Community through the years. Her sisters in the convent could always count on her wisdom and sound advice, as could her school students and their parents.
Most admirable, however, has been her acceptance of her illness and putting herself in the Hands of God in these last months of suffering from cancer. She truly took up her cross and followed Jesus!
Sister is preceded in death by her parents, Thomas and Christina Gilsenan, her brother-in-law, Ray Crinion, her aunts and uncles and we mention especially, her uncle, Reverend. Fr. Matthew Gilsenan, who was a strong supporter of her vocation to the Loreto Order.
Sister Christine will be sadly missed by her dear family, her brother Matt and Sister-in-law Dolores, her brother Joe and sister-in–law Bridget, her sister, Anne Crinion, her cousins, nieces, nephews, grand-nieces and grand-nephews, one great grand-niece and other relatives, her Loreto Sisters, her former students and all her friends.
We commend her to the Lord, to whom she committed her life as a Loreto Sister sixty-four years ago. May she rest in peace.
Visitation will begin at 5:30 p.m. with a Rosary at 6:30 p.m. on Monday, July 23, 2018, at SS. Simon & Jude Cathedral, 6351 N. 27th Avenue in Phoenix. Funeral Mass will be held at 10:00 a.m. on Tuesday, July 24, 2018 at SS. Simon & Jude Cathedral with interment following the Mass at St. Francis Catholic Cemetery, 2033 N. 48th Street in Phoenix. In lieu of flowers, donations may be made to the Loreto Sisters Retirement Fund, SS. Simon & Jude Convent, 6351 N. 27th Avenue, Phoenix, AZ 85017. Condolences may be expressed at www.whitneymurphyfuneralhome.com