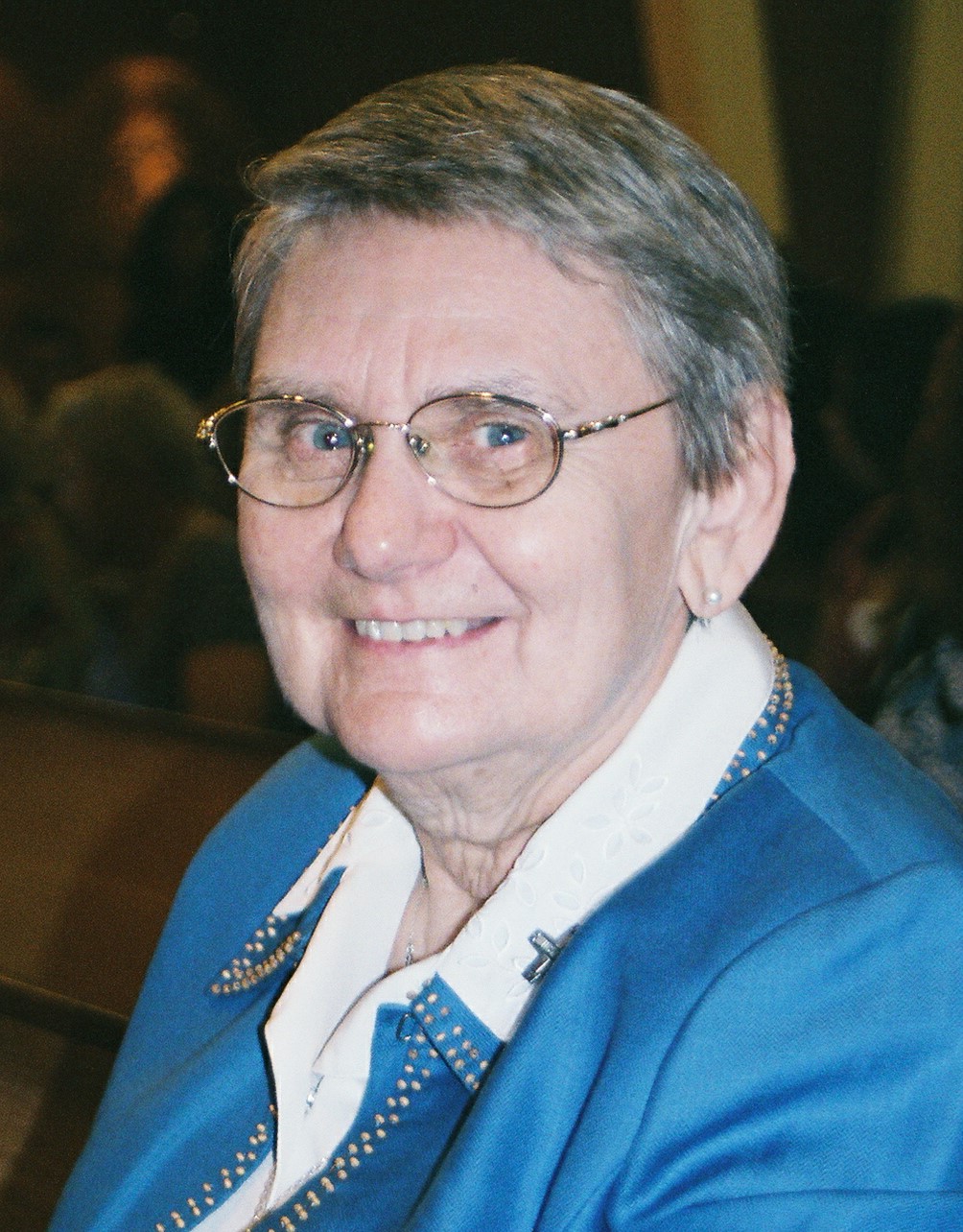 Sister Gabrielle Marry, I.B.V.M. (Marie Therese Marry) was the first baby born in the new Lourdes Hospital in Drogheda, County Louth, Ireland on January 18, 1940. She was the daughter of Austin and Bridie (Lenihen) Marry. She entered the Novitiate in Loreto Convent, Navan, on October 17, 1958. A few years later she came from Ireland to join the Sisters and staff of Ss. Simon and Jude School in Phoenix where she taught 2nd & 5th grades for a number of years. She also taught at Sacred Heart School in Prescott for some years and worked for a time at Our Lady of Guadalupe Parish in Flagstaff as a Pastoral Associate.
Sister Gabrielle held a B.A degree in History/English from University of San Diego and an M.A. in Counseling and Guidance from the University of Arizona and retained a great appreciation for both of these fine universities. It was shortly before she had completed her studies at U of A that she had to deal with the onset of Multiple Sclerosis – – – a condition which she bravely and cheerfully handled for more than 50 years.
With the underlying Spirituality and Constitutions of the Loreto Sisters being Ignatian, Sister was drawn to working with the Loyola Project, which was sponsored and run by the Jesuit priests at St. Francis Parish and Brophy Preparatory High School. For many years she worked with this Project, and later went to Our Lady of Fatima Parish in Phoenix and taught reading and language skills to children with English as their second language.
Another project which she dearly loved was a Correspondence Anger Management Program for prisoners. For several years she was involved with this, in fact, until her fingers could no longer hold a pen to write or type the answers to the prisoners’ questions.
After her years in the educational arena, Sister Gabrielle opted for Pastoral Care Work, and having completed her CPE training at Good Samaritan Hospital, she served as a Clinical Pastoral Care Minister to the patients at Baptist Hospital (now Abrazo Health) in the initial stages of her pastoral care apostolate, and, until very recently, she volunteered in a similar ministry at The Palazzo Care Home.
She never, however, abandoned her interest in the educational scene and very frequently wheeled her motorized chair into the classrooms at Ss Simon and Jude, sharing stories with the children and educating them about the wonderful Foundress of the Loreto Sisters, Venerable Mary Ward. Our ‘Companions of Mary Ward’ Group was also blessed by her leadership and direction, and all members are so grateful for her love and her sharing of prayer and spiritual refreshment.
Though confined to a wheelchair for most of her adult life because of her MS, she never let her disability stop her from teaching, working, or helping others. She was an especially welcoming person who took a personal interest in lifting others up. Her bright smile, quick wit and joyful spirit were infectious. To know Sr. Gabby, was to love Sr. Gabby, and her perseverance and determination to live her life to the fullest, despite her disability, was a daily inspiration to all who knew her.
Sister Gabrielle was preceded in death by her parents, Austin and Bridie, and by her brothers, Gerry, Phil, Michael and Oliver. She is survived by her sister, Sister Concepta (Good Shepherd Order) and by her sister-in-law, Rita, and devoted nieces, nephews and cousins, who will mourn her loss, as will her Loreto Sisters and the clergy and staff of Ss. Simon and Jude Cathedral and School, also, all those who were co-workers in education ministry and in her pastoral care ministry, her dear friends, her former students, and all who may have been blessed by her care and prayer in their times of ill-health.
A special thank you to Hospice of the Valley and the many special friends and caregivers who cared for Sr. Gabrielle in the final weeks of her life.
The motto engraved on Sister Gabrielle’s Religious Profession ring says: “Not I, but the grace of God with me.” You have, Sister, through your life, shared that grace of God so beautifully! And now, Sister “Gabby,” our love and prayers go with you! We commend you to the Lord, to whom you committed your life as a Loreto Sister 61 years ago. May you rest in peace.
Visitation will begin at 5:00 p.m. with a Vigil Service & Rosary at 6:00 p.m. on Monday, June 10, 2019 at SS. Simon & Jude Cathedral, 6351 N. 27th Avenue in Phoenix. Funeral Mass will be held at 10:00 a.m. on Tuesday, June 11, 2019 at SS. Simon & Jude Cathedral, immediately followed by a reception in Smith Hall. Interment will follow at St. Francis Catholic Cemetery, 2033 N. 48th Street in Phoenix.
In lieu of flowers, donations may be made to the Loreto Sisters Retirement Fund, SS. Simon & Jude Convent, 6351 N. 27th Avenue, Phoenix, AZ 85017. Condolences may be expressed at www.whitneymurphyfuneralhome.com

Offer Hugs From Home Condolence for the family of Sister Gabrielle Marry, I.B.V.M.