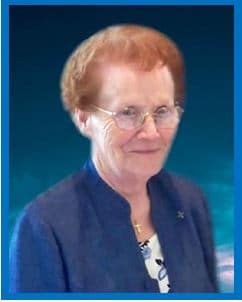 Sister Maria Sheerin was born in Castletown Geoghegan, County Westmeath, Ireland on October 29, 1930. She was the daughter of John and Mary Ellen (Ryan) Sheerin. She entered the Novitiate in Loreto Convent, Navan on September 8, 1948. She was one of eleven children, six of whom were dedicated to the Lord’s service — two Priests and four Religious Sisters.
She taught in Elementary Loreto Schools for 16 years and then branched into Adult Education. She served as Coordinator for Dublin Institute of Adult Education. She also served some years as Coordinator for the Center for Disadvantaged Women in Navan, County Meath. Later, with encouragement of a priest-cousin, she came to California and served as Director of Adult Faith Formation from 1995 to 2009 at St. Matthew’s Parish, San Mateo, California.
Sister Maria received her teacher training at Our Lady of Mercy College, Carysfort in Dublin, in 1961, and a diploma in Religious Studies in 1976, and a Bachelor of Divinity in 1980 from Maynooth Seminary in Ireland. She did post graduate work in Catechesis at the Catholic Institute in Paris.
Sister Maria’s love of learning continued throughout her entire life. She shared her enthusiasm for her faith with others, inspiring many throughout her lifetime. She achieved mastery of four languages — Gaelic, Latin, French and English, and her special joys included reading, and singing in choirs. She had a great appreciation of the Arts in any form, and her knowledge was deep and wide.
Upon retiring in 2009, she came to SS. Simon and Jude Parish in Phoenix, and taught Latin to the eighth graders at the school, as well as classes in Faith Formation at the Parish. Additionally, she reached out in the Phoenix area becoming very active in jail ministry.
Thank you, Sister Maria, for your fine example, your sharing of knowledge, your loving service, and your faithfulness in your Religious Vocation. May you now sing with the choirs of angels in your Heavenly Home.
Sister Maria was preceded in death by her parents, John & Mary Ellen, and by her brothers, Jimmy, John J., and Patrick. She is survived by her sisters, Sister Teresa, Sister Philomena, Sister Bernadette, Martha Laffan and Brid Kiernan and by her brothers, Father Michael and Father Anthony. She will be sadly missed by many family members, her Loreto Sisters, her Mary Ward Companions, the clergy and staff of SS. Simon & Jude Parish, and the clergy and staff of St. Matthew’s in San Mateo, CA.
A special thank you to Hospice of the Valley and the many special friends and caregivers who cared for Sr. Maria in the final months of her life.
Visitation will begin at 6:00 p.m. with a Vigil Service & Rosary at 6:30 p.m. on Wednesday, July 21, 2021 at SS. Simon & Jude Cathedral in Smith Hall, 6351 N. 27th Ave. in Phoenix. Funeral Mass will be held at 10:00 a.m. on Thursday, July 22, 2021 at SS. Simon & Jude Cathedral in Smith Hall immediately followed by interment at St. Francis Catholic Cemetery, 2033 N. 48th St. in Phoenix. The Funeral Mass will be livestreamed on the SS. Simon & Jude Cathedral Facebook page at: https://www.facebook.com/simonjudecathedral
In lieu of flowers, donations may be made to the Loreto Sisters Retirement Fund, SS. Simon & Jude Convent, 6351 N. 27th Ave., Phoenix, AZ 85017. Condolences may be expressed at www.whitneymurphyfuneralhome.com.

Offer Hugs From Home Condolence for the family of SISTER MARIA SHEERIN I.B.V.M.