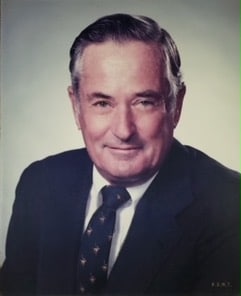 Milton Patmore Smith Jr. who everyone knew as “Bud”, was born to Fannie and Milton Smith in Phoenix Arizona on December 5, 1926, and passed away peacefully on Friday, May 20, in his home.

Bud can trace the lineage of his family, noting that he is a descendent of William Bradford, a passenger on the Mayflower and the first Governor of the Colonies.
Bud’s involvement in the agriculture industry was no accident. His father, Milton, Sr., moved from Rhode Island to Arizona in 1919, after serving in WW1, with his bride, Fannie. They moved to Arizona where he was a cotton broker, trading long-staple cotton for the textile mills in the New England states.

Bud and his two sisters, Winifred and Marilyn, attended school in Phoenix graduating from North High. Bud then attended the University of Arizona graduating in 1948. That same year he married Vada Stewart and they moved to the family cotton farm 50 miles south of Phoenix. They had four boys Le, Stewart, Mike, and Gary, all of whom were proudly raised on the farm.

Bud did not keep his focus solely on cotton. He also ran a feed lot, a cattle ranch, had an Allis Chalmers dealership, and grew melon, lettuce, hay and alfalfa. Bud was on the board of Stanfield School District. He was a founding member of the Maricopa Rotary Club. He was in charge of the Pinal County campaign committee to elect Barry Goldwater for president. His committee planned a large fund-raising event held at Francisco Grande just west of Casa Grande and Barry came to speak to his Pinal County supporters. Bud was also a member of Habitat for Humanity and went abroad helping build houses for the poor.

Bud and Margo Cracchiolo were married in Iron Springs in 1990. There were now nine children with the addition of Brad, Mike, Wendy, Marianne and Andy. For the last 30 years Bud and Margo have happily spent their summers in Pinetop and their winters in Paradise Valley where they have many mutual friends in both locations.

A celebration of life will be held at Paradise Valley Country Club on Friday, June 3, 2022 from 3:00PM to 5:00PM. In lieu of flowers, donations to the Salvation Army in his name would be greatly appreciated. Salvation Army Adult Rehabilitation Center (ARC) or the website: phoenixarc.salvationarmy.org

Offer Hugs From Home Condolence for the family of SMITH JR, MILTON PATMORE