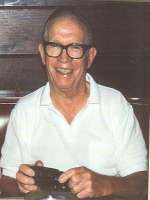 Passed away April 29, 2011. He was born on September 17, 1915 in Struble, Iowa, to Frank Benjamin and Mary Ann Roeser. He served in the U.S. Navy during World War II as a Chief Radio Technician aboard the destroyer U.S.S. Frankford DD-497. He participated in the invasion at Normandy on D-Day. Smitty married Marguerite Helen Thayer and the couple owned and operated a radio and television business in Storm Lake, Iowa, for ten years. They relocated to Phoenix, Arizona in 1956, where he was employed as a microwave engineer for Arizona Public Service for twenty-two years. He loved hunting, fishing, and camping with his family. Smitty was a Craftsman and his gift for detail was expressed in turning wood and working in metal, even in his early nineties. A life member of the NRA, he also belonged to AZ Destroyer Escort Association (DESA), and was a member of the Tin Can Sailors Association. He was preceded in death by his wife, Marguerite, his sisters Frances Schott and Dorothy Ann Manners. He treasured his sons and their wives: David and Marilyn, Steven and Robyn, Randy and Louise, as he did his grandchildren and spouses: Brian Smith and Sherri, Ken Smith and Holly, Kristi and Dan Weldon, and his six great-grandchildren: Tanner, Hannah, Jake, Gavin, Jax and Jewel.
Visitation will be held at 9:00 AM with A Service of Remembrance at 10:30 AM, Saturday, May 7th, at Whitney & Murphy Funeral Home, 4800 E. Indian School Road, Phoenix. Graveside Service with military honors will follow at 11:30 AM at St. Francis Catholic Cemetery, 2033 N. 48th St., Phoenix, AZ. Contributions may be made to: Arizona Destroyer Escort Association, 2550 S. Ellsworth Rd., #170, Mesa, AZ 85209

Offer Hugs From Home Condolence for the family of SMITH, LAWRENCE NICKLOS “SMITTY”