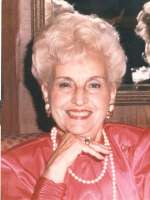 Maria, known to her family and friends as Marisa, was born in Rome, Italy on July 31, 1919 and died in Scottsdale on January 4, 2012. She is preceded in death by parents, Ugo and Valentina, and sister, Renata. Survivors include her 5 children: Maria Pomeroy (Tom), Stefan (Nancy), Dennis (Ann), Leslie Cantrell (Paul), Jeffrey (Marta), niece, Giuseppina “Giusy” Tedesco-Gueli (Pippo), and their 3 children, 14 grandchildren and 3 great grandchildren. The daughter of a jewelry merchant, Marisa was educated in Rome and experienced life in Europe during World War II. Marisa was a scholarly person and a woman of great faith. She became a war bride upon her marriage to our father, James A. Smith of Akron, Ohio in 1945. After arrival in the United States in 1945, Marisa became a well-respected teacher passing along her wisdom to thousands of students over her 40 year teaching career. Retiring from education at the age of 72, Marisa continued to spread her knowledge and love for learning to children as a volunteer at Indian Bend Elementary School and St. Thomas the Apostle Catholic School. She was a woman of great kindness, generosity, humor, faith and spiritual conviction. A devout Catholic, she spent her final years happily surrounded by family and loved ones. We will miss our mother greatly and are comforted to know she is happy and at peace. We will love you forever Mom. Visitation Sunday, January 8th, 6:00-8:00 P.M. at Whitney & Murphy Funeral Home, 4800 E. Indian School Rd. Funeral Mass Monday, January 9th, 10:30 A.M. at St. Thomas the Apostle Catholic Church, 2312 E. Campbell Ave., Phoenix, to be followed by Graveside Service at Paradise Memorial Gardens, 9300 E. Shea Blvd., Scottsdale and reception.

Offer Hugs From Home Condolence for the family of SMITH, MARIA ROSARIO