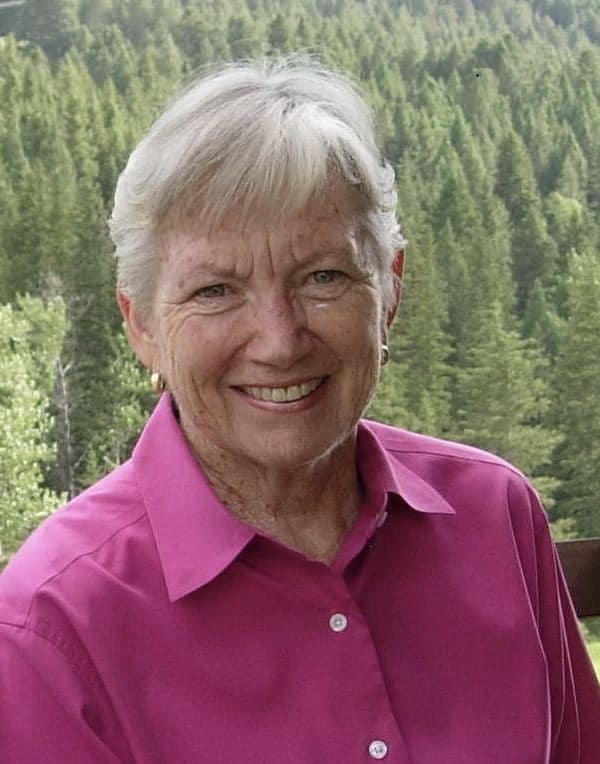 Alice Cosette Wiley Snell of Phoenix, Arizona, known to all as Dinky, died at home peacefully on December 28, 2021, in the bed her great grandfather had made for his bride, Emma Lyons, at the turn of the 19th century and next to her husband of 67 years, Richard Berlin (Dick) Snell, with family all around her.

Dinky was born in Los Angeles, California, to Cosette and Robert Wiley in 1932. She attended Stanford University on scholarships while working several jobs and volunteering to record law school texts for blind students – a volunteer role she continued with Arizona’s Recording for the Blind and Dyslexic. Amidst her busy college schedule she also managed to meet her future husband her senior year and graduate in 1954 with a degree in political science. Dick and Dinky were married that year in Hemet, California. They have three daughters, Karen, a San Francisco civil rights attorney; Marilyn, a journalist living in Los Angeles; and Sarah, a physician in Scottsdale. They have two grandchildren, Sophie and Clay Meyer, both living in the San Francisco Bay area.

After Dick’s two-year stint as a U.S. Infantry Officer in Germany, in 1956 the Snells returned to Dick’s hometown of Phoenix, where Dinky’s mother-in-law Betty Snell introduced her and toured her around town, encouraging her to choose a way to give back to the community. It was sound advice but also second nature. Dinky was well aware of her good fortune and also her knack for bringing people together to get things done, immersing herself in Arizona civic and community affairs for the next 50 years. As someone who believed that public education was the backbone of a healthy nation, she worked to help make Arizona State University a flagship campus. She was past chair of the Arizona State University Foundation; was on the Dean’s Advisory Boards of ASU’s College of Education and College of Liberal Arts and Sciences; and was a member of the Foundation’s Women in Philanthropy program. In 1998 she and Dick co-chaired the ASU Campaign for Leadership, which raised more than half a billion dollars for the university. In 2002, the family endowed the Alice Wiley Snell Professorship of Education to focus on educational policy research, later modifying the position to better support and promote excellence in the area of teaching.

Dinky was Vice Chair of the Board of the state’s largest health care system, then known as Samaritan Health Service, and served as Chair of the Medical Center Redevelopment Corporation, which, in conjunction with the City of Phoenix, redeveloped a 100-acre area in central Phoenix. She was also the first female Chair of the Valley of the Sun YMCA as well as the Y’s Resource Board; and the Chair of the Governor’s Task Force on Juvenile Corrections.

In 1980 she and Charlotte Buchen formed a business partnership for delivering public relations and communications services, Buchen Snell & Company. In 1985 she left the partnership and joined the Arizona Department of Education as business-industry liaison to develop job training programs. She was later promoted to Deputy Associate Superintendent in the Vocational Division, resigning in 1989 to run for State Superintendent of Public Instruction. Though she lost her bid, she never regretted the chance she had to tour the state during her campaign, meet its people, and listen to their ideas about how to make Arizona schools better.

Dinky was named Phoenix Woman of the Year by the Phoenix Advertising Club in 1989 for her community service work. In 1993 she was named Volunteer of the Year by the Alexis de Tocqueville Society of the Valley of the Sun United Way, and in 2008 was honored as a Historymaker, Philanthropist, and Civic Leader by the Arizona Historical Society.

Her powers of persuasion and ability to advance her civic and community agendas were artful, creating the impression that the genesis of the project proposal or innovation had been others’ idea and not hers. Her daughter Karen remembers being on the receiving end of this tactic. As a senior at Arcadia high school in the 1970s, Karen thought it her own rebellious idea to volunteer alongside conscientious Vietnam War objectors to work with mentally disturbed patients at the Arizona State Hospital. Only decades later did she put two and two together when an article about Dinky mentioned that her mother had headed the institution’s volunteer program.

As her daughters came of age in the professional world, Dinky joked bemusedly with them about how in board meetings her ideas were frequently applauded and adopted but only after a male board member had borrowed her suggestions and made them his. She always had her eyes on the prize, though, and maneuvered this world with forbearance, effectiveness, and a really good laugh.

Some progress was made during her lifetime, however. While reading a 1966 Arizona Republic clip about Dinky’s volunteer achievements, her grandson, Clay, 25, thought the paper’s reference to “Mrs. Richard Snell” was a typo. He was unaware that it had been standard practice just two generations before him that a married woman was to be identified in public by her husband’s name. “That’s crazy,” Clay said. Dinky would have agreed.

She was an effortless leader with well-earned accolades and an even better wife, mother, and friend. Hospitality was a social grace she took seriously, whether it was toward her daughters’ teenage friends whose homelife was unhappy and who needed some TLC or Dick’s business clients and associates who needed courting. Even as her daughters began to have their own families there was no doubt where holiday dinners would be. Dinky was queen of the kitchen ¬– the new American hearth ¬– and folks knew they could just stop by and have a seat at her table.

Family vacations abroad were a Dinky specialty but her favorite places were closer to home, with Sunday picnics to the Verde River and tubing on the Salt, weeks at the Snell cabin in Greer, and treks to the North Rim of the Grand Canyon.

When asked as part of an oral history project for the Arizona Historical Society what advice she would give young people, she said, “Get as much education as you can, work hard, and be kind to others.”

In addition to her husband, daughters, and grandchildren, she is survived by her sons-in-law Eric Meyer and Gregory Williams; beloved sister-in-law Mary Wiley; many nieces and nephew; and siblings Odie Callin and Mike Wiley. In lieu of flowers, donations can be sent to the ASU General Scholarship Fund. Memorial plans pending. Condolences may be expressed at www.whitneymurphyfuneralhome.com.

Offer Hugs From Home Condolence for the family of SNELL, ALICE COSETTE WILEY