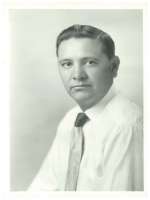 a fourth generation Arizonan passed away on May 20, 2011. He was born in Metcalf, Arizona on 2/25/1919 and raised in Miami, Arizona. Survivors include his wife Jill (Sawyer), son Joe Jr., daughters-in-law Karen and Diane, daughter Jeannine Wilder, and step-children Laurie and John (wife Sherine). Grandchildren are Marie, Nicole, Jonna (Jason), Michael, Joe (Jill), Steven and Natalie; and step-grandchildren Lindsay, Matthew, Bradley, and Alexis; brother Leo Obezo and brother-in-law Jack Starr. He was preceded in death by his wife of 56 years, Frances and his son John. Mr. Sotelo is a former Real Estate Commissioner for the State of Arizona where he served under three governors. He instituted several reforms including law of agency requirements and was instrumental in enforcement. He also had a Presidential appointment for Program Director, Western Region, U. S. Department of Commerce. Earlier in his career he was Director of the Securities Division of the Arizona Corporation Commission. He served as President of the Midwest Association of Securities Administrators, and assisted congressional drafting of the 1962 U.S. Real Estate Investment Company Act. He was Chairman of the Arizona Development Board (predecessor of the Arizona Department of Commerce). He was often solicited for educational activities, including the University of California, Berkeley, the Princeton Testing Center of Princeton, New Jersey, and the Thunderbird Graduate School of International Business. An ardent golfer, he played almost 5,000 rounds on Arizona courses, mostly at the Phoenix Encanto Golf Course where he served as President of the Men’s Club. During his time in Miami he was a delivery boy/station leader for the Arizona Republic and served as scoutmaster of troop 105 and leader of the 3-G Council. He is a former miner with Inspiration Copper Company and attended the University of Arizona. He was instrumental in consolidating four schools districts in Miami into one successor district. While in Miami, he was a vice-president of a local title company and savings institution. During World War II he served as an infantry point scout in the Timberwolf Division in the European theatre where he was severely wounded during the Battle of the Bulge and received several military medals, including the Purple Heart. One of his medals was presented by President Truman. The French and Belgium governments awarded him citations for valor including the coveted Belgium Star. The only other Arizonan at that time who received this citation was a former U.S. Ambassador to Great Britain. He is a former Chairman of the Board of Trustees of Phoenix Memorial Hospital, State Commander of the Veterans of Foreign Wars and Director of the national VFW. The Visitation will be at 6-8 pm Friday, June 3, 2011 at Whitney & Murphy Funeral Home, 4800 E. Indian School Rd. Phoenix, Az. The Funeral Service will be at noon Saturday, June 4 at Valley View Bible Church, 4222 E. Lincoln Drive, Paradise Valley, Arizona. Interment will follow at St. Francis Catholic Cemetery, 2033 N. 48th Street, Phoenix, AZ.

Offer Hugs From Home Condolence for the family of SOTELO, JOE F.