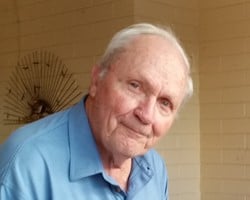 Don was the fortieth employee and had a long career with Motorola Research. He worked on multiple government projects including, a military communication system called “Radio Central” and special projects for several three letter agencies to develop communication devices used strategically during the Cold War.

Don was an active ham radio operator throughout his life and in August of 2021, was awarded the DX Century Club by the Amateur Radio Relay League for two-way communications with over 450 other ham operators in over 100 countries. Along with his lifelong friend Andy Anderson, Don delighted in adding laughter to the annual tournament of his golfing group original poems and unusual trophies, highlighting the golfing gaffes of the members. Don had a smooth and mellow tenor voice. He sang many solos and participated in numerous musical events. He sang with his church choir into his nineties.

A Memorial Service will be held on Friday, December 3, 2021, at Whitney & Murphy Funeral Home, 4800 E Indian School Road, Phoenix, AZ 85018 at 10:00am. In lieu of flowers, the family suggests donations be made to the Pat Tillman Foundation. Condolences may be expressed at www.whitneymurphyfuneralhome.com.

Offer Hugs From Home Condolence for the family of SOULE, DONALD “DON” FRANCIS