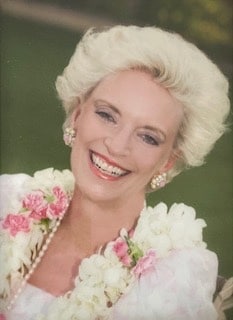 Suzanne Robison Spooner, of Phoenix Arizona, passed away at home on November 28, 2020, surrounded by family.

Suzanne was born in Alexandria, Louisiana on September 7, 1944. At the time, her mother, Marion “Nan” Robison was living with her parents in Alexandria while her father, Bob John Robison, was serving in the Pacific as a naval aviator. Suzanne would later acquire a love of travel, partly as a consequence of frequent moves related to her father’s naval career. She graduated Phi Beta Kappa from the University of North Carolina at Chapel Hill. She would spend the next decade raising her daughter and son, while actively volunteering with a number of organizations, with a focus on children.

Later, she would successfully translate her many volunteer activities into a long and productive career in the educational and charitable field, most notably with George Washington University and the University of Maryland, concluding her career at the Kennedy Krieger Institute, where she combined her gift for fund-raising with her passion for the health and welfare of children.

Above all, Suzanne was a dedicated and devoted mother, daughter and sister, and, later, adoring grandmother. Following her retirement, Suzanne moved to Phoenix, to be near her son and his family. Over the next several years, she would spend many happy months living in Rome, Italy, to be with her daughter Raney and son-in-law Dario Mellini. She was also a cherished friend to many, all of whom will miss her dearly.

Suzanne is survived by her brother, Robert Robison (Barbara) of Darien, CT; daughter, Raney Mellini (Dario) of Rome, Italy; and her son, William Webb (Cara) of Phoenix, AZ, grandson Gunnar Webb, as well as her nephews and niece.

Suzanne is preceded in death by her father (Bob John Robison) and mother (Marion). In lieu of flowers, contributions in Suzanne’s memory can be made to the Barrow Neurological Foundation or All Saints’ Episcopal Church, Phoenix, AZ.

Offer Hugs From Home Condolence for the family of SPOONER, SUZANNE ROBISON