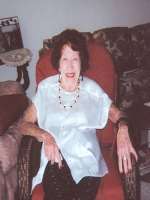 As the sun meshed with the heavenly clouds to form a lovely sunset concluding a day of relatives and friends visiting Margaret, age 94, in her Phoenix home, she told Van Lee, her dearest friend of 70 years, “I will not have to go to dialysis anymore”….and, her loving, faithful care giver, Bonnie, “this has been one of the greatest days of my life”….before asking for a meat loaf dinner, and a chocolate cherry for dessert, and then without another word peacefully passed into the embrace of our Lord Jesus Christ at 6:00 PM, December 9. Margaret was born the daughter of Fred and Nellie, grocers, in a southern Illinois town in 1916. Her three older brothers Glenn, Mark and Vernon preceded her in death. She married Mike Sprinkle, farm owner, Watson, Illinois, in 1935, and together they became well known entrepreneurs in Centralia, and Effingham, Illinois; Wisconsin; Indiana; California; and, Arizona where they came in 1970 owning a motel in Globe prior to Mike’s death in 1993. She is survived by her son, Mike “Mickey” Sprinkle, and beautiful, caring daughter in law Dr. Julia Iler-Sprinkle, Phoenix; loving, faithful, proud of their “Boobo” grandchildren Margann Maria (Jeremy) Duke, Reno; Deanne Michelle (Jeff) Wilsted, Portland; Michael Christopher (Kristi) Sprinkle, Sparks; Major Julianne Joan (Robert) Sprinkle-Harrison, Leesburg, VA; and their mother, Ardynne, Ann Sprinkle, Reno; and eleven great grandchildren, Zachary, Ian, Abel, Anni Yodit of Reno; Faith of Portland; Devin, Michael David, Austin of Sparks; and, Liberty, Berek, Rand of Leesburg. The calls and visits since her death echo an identical theme of an enthusiastic, loving, feisty, honest person who would do anything for you; and, a woman “that will never be forgotten” by those who were blessed to meet her. Margaret’s life will be Memorialized this Saturday, December 18th, in a blessed Memorial Service at Whitney & Murphy Funeral Home, 4800 East Indian School Road, Phoenix 85018 at 10:30 am. Private family Interment at St. Francis Cemetery Mausoleum followed by a public social reception as announced at Memorial Service. In lieu of flowers Memorials in Margaret E. Sprinkle name at: Boy’s Town, PO Box 145, Boy’s Town, NE 68010, and/or Salvation Army, 2707 E. Van Buren, Phoenix, AZ 85008, attn: Oberhamer.

Offer Hugs From Home Condolence for the family of SPRINKLE, MARGARET “Boodo”