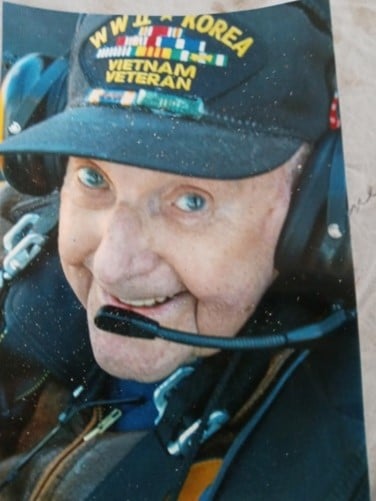 He entered the military at age 16 when his National Guard unit was activated. He served in the Korean War, WW II and Vietnam retiring as a Major from the Army. He received numerous military medals the latest being the Peace Medal from South Korea. In 1964 he and his wife, Pat Campbell Stafford retired in Huron, SD their home town.

In 1968 George and Pat moved to Scottsdale, Arizona. After enjoying several businesses ventures he volunteered for 25 years with the Scottsdale Police.  He had many friends in the Scottsdale area, played bridge and poker regularly. He enjoyed being active in service groups such as the Veterans of Foreign Wars, Elks and American Legion. He returned to SD each fall to hunt pheasants with friends and family.

He was preceded in death by his wife, Pat Stafford. He is survived by his daughter, Gloria Stafford, Fort Worth, Texas, two grandchildren, Carina Menaker (James) Fairbanks, Alaska and Matthew Lopez (Jennifer) Houston, Texas and five great grandchildren: Diego, Essie and Lucy Menaker and Sammy and Tommy Lopez.

George requested no funeral. His ashes will be interred at a later date.  If you are so inclined the family suggests donations to a charity in his name. Condolences may be expressed at www.whitneymurphyfuneralhome.com.

Offer Hugs From Home Condolence for the family of STAFFORD, GEORGE