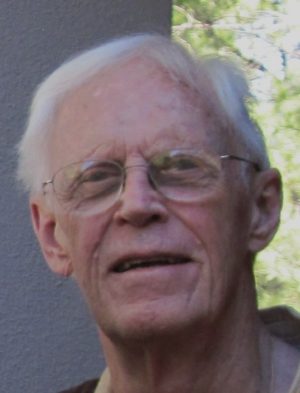 Robert (Bob) Eugene Stejskal, 85, passed away, surrounded by his family, on November 5, 2016, in Phoenix, Arizona. He was born on September 6, 1931, in Crete, Nebraska, to Francis and Helen (Krejci) Stejskal. Robert attended the University of Notre Dame until 1953, and graduated from Creighton University Medical College in Omaha, Nebraska in 1957. As a medical student, he met Margaret (Peggy) Connor, and they married a year later on July 17, 1954. While he completed his medical training, Bob and his growing family moved several times. From Omaha, they moved to Duluth, Minnesota, and then to Bremerhaven, Germany, where he served as a Captain in the U.S. Army from 1958 to 1961. They returned to Minnesota, where Bob completed his medical residency in St. Paul. In 1964, Bob, Peggy and their five sons made a final move to Phoenix. He joined the Park Central Radiology practice at St. Joseph’s Hospital, where he remained until his retirement in 1992. He was a member of the Maricopa County Medical Society and a parishioner at Saint Thomas the Apostle Roman Catholic Church.

Bob was a private, quiet, even shy, man, with an understated manner. However, his insight and wickedly dry humor revealed an active intelligence. He expected excellence and rectitude from both himself and those he cared about. His zeal for the “right way of doing things” variously provoked in others admiration, consternation and good-natured teasing. Still, Bob consistently marshaled his character, intelligence and compassion for the benefit of others.

Over the course of 20 years, Bob served as head of the radiology residency program at St. Joseph’s Hospital, where he was responsible for training dozens of young radiologists. In an era of rapid technological change in the field, he never let the complexity of high-tech radiology distract him from his primary focus: teaching the art of being a disciplined and effective physician. For many of his students, Bob was a father figure, whose skill, constancy and steadiness made him worthy of emulation. His impatience with nonsense made him a sought-after source of honest advice.

Despite a busy physician’s schedule, Bob had an unwavering focus on his family. He would spend long hours enjoying the company of his five sons, whether playing catch, coaching them in little league or teaching them to camp, hunt and fish. While firm as a father, he could frequently surprise with his gentleness, patience and generosity—qualities that seemed to spring from an understanding of and sympathy with the nature and needs of boys and, later, those of maturing adult men.

His enduring loyalty and devotion as a husband culminated in the selfless caretaking of his wife, Peggy, during her two-year struggle with cancer.

Bob had a lifelong love of sport, and toward the end of his life and especially after the loss of his wife, golf with his friends brought him much joy and solace.

Robert is preceded in death by his parents, Francis and Helen; his sister, Florence, and brother, Francis; and his wife of 60 years, Margaret. He is survived by his five sons, Thomas (Betty), William (Rita), Michael (Jo), David (Julie) and Patrick (Rosa); his five grandchildren, Amy, John, Lily, Julia and Rocío; his great-granddaughter, Isabel; and his three step-great-grandchildren, Fiona, Sydney and Braeden.

A Memorial Mass, with Rev. Dan Sullivan, S.J. presiding, will be held at 3:00 p.m. on Friday, December 30, 2016, at Brophy Chapel, located at 4701 N. Central Avenue, Phoenix, AZ. Following the service, family and friends are invited to a 5:00 p.m. reception at the Hermosa Inn, located at 5532 North Palo Cristi Road, Paradise Valley, AZ. Donations may be made to the Society of St. Vincent de Paul. Arrangements entrusted to Whitney & Murphy Funeral Home.

Offer Hugs From Home Condolence for the family of STEJSKAL, ROBERT (BOB) EUGENE