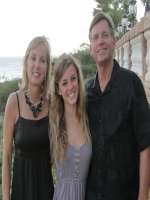 Bill, a Phoenix native, was born in Phoenix on September 2, 1947 to William Arthur Stern (deceased) and Norma L. Koon.  He attended Encanto and Clarendon elementary schools and West Phoenix High School.  He was quarterback of his high school football team, the Thunderbirds.  Bill was a member of The Fraternity of Phi Gamma Delta at Arizona State University.

He graduated from ASU and went into the family business with his mother and father.  Stern Produce was established by his grandfather, William Alfred Stern in 1917.

Jennifer was born August 19, 1959 to William Dean Plank (deceased) and Mary Jane Nelson in the doctor’s office in Granby, Colorado.  She graduated from Sidney High School in Sidney, Nebraska.  She worked in Lincoln Nebraska and Breckenridge Colorado before moving to Phoenix where she was a Flight Attendant with the “new airline” America West for 10 years. While she had many stories as a Flight Attendant, one of her proudest moments was when she flew the troops home from the Iraq War through Bahrain. After marrying Bill in 1991, she retired from the Airline and focused on raising Katey, leading her tennis team as team captain at PVCC and various charity work throughout Phoenix. Jennifer enjoyed many activities with Bill including skiing, snorkeling, and anything Katey was involved in.

Katelyn “Katey” was born in Scottsdale on July 2, 1993.  She attended Hopi Elementary School, All Saints Episcopal Day School, Xavier College Prep and Arcadia High School.  She was loving her freshman year at Southern Methodist University as a Merit Scholar and was looking forward to pledging a sorority.  Katey was a beautiful girl with a kind spirit and an infectious laugh.

Katey is survived by all those above who loved her and we will miss her dearly, as will her many friends.

A Memorial Service for them will be held at 2:00 pm on Sunday, January 13, 2013 at St. Barnabas on the Desert located at 6715 North Mockingbird Lane, Paradise Valley, Arizona.

Memorials in their honor may be made to the Stern Family Memorial Foundation care of Arizona Community Foundation 2201 East Camelback Road Suite 405 B Phoenix, AZ  85016.

Offer Hugs From Home Condolence for the family of STERN, William A. “Bill, Jr., Katelyn Jane “Katie”, and Jennifer J.