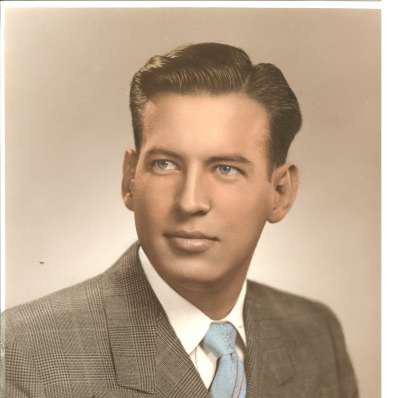 Most people who knew Charles Richard “Dick” Stevens understand that there was never a piano he didn’t like. His baby grand was essentially his seventh child. Countless celebrations with family and friends weren’t complete until he sat down to play—from his favorites to songs he composed himself. Dick died on May 3, 2015—at the age of 87—after a long, good life. He was born in Lincoln, Nebraska to Ersell Marion “Steve” Stevens and Elizabeth Loretto “Bess” (Cheney) Stevens. The family returned to Arizona when he was just two weeks old. He graduated as valedictorian from St. Mary’s High School in Phoenix and then attended Texas A. & M. After a year, Dick joined the Navy where he served for a year and a half before WWII ended.  He then earned a degree in electrical engineering from Stanford. Dick’s passion for all things mechanical led to a career as an engineer first with Motorola, and then with Garrett AiResearch where his expertise in gas turbine engines held him in high regard. He retired from AiResearch after more than 30 years. In 1953, he married the love of his life—Marie Louise “Marylou” Prenovost. For the next several decades, they were busy raising six children. Dick’s curiosity and interest in just about everything led him to pastimes such as photography, stamp collecting, writing, genealogy, music composition, reading and traveling. He was a good Christian man, father and husband and will be greatly missed by his wife of 62 years, Marylou, and six children: Chuck (Margaret), Bill (Maria), Mark (Patty), Cathy (Bob), Peggy (Larry) and Carol (Joe), along with 16 grandchildren and four great-grandchildren. He is preceded in death by his parents Ersell and Elizabeth and his brother Dr. Robert Stevens. A funeral Mass will be held at the Franciscan Renewal Center (the Casa), 5802 E. Lincoln Drive, Scottsdale AZ 85253, at 9:30 am on Saturday, May 16, 2015. In Dick’s memory, please consider donating to the Muhammad Ali Parkinson’s Center at Barrow Neurological Institute: www.supportbarrow.org/MAPC. Arrangements entrusted to Whitney & Murphy Funeral Home.

Offer Hugs From Home Condolence for the family of STEVENS, CHARLES RICHARD