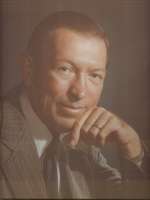 Passed away September 14th at the age of 85. He was the son of Elizabeth and Ersell Stevens. Bob served in the Navy and as Captain in the Army Medical Corps in Korea (Bronze Star and Purple Heart recipient). He was an Arizona native, and had many friends as patients during his family practice in Phoenix. Bob is survived by his wife, Rosalee, sons John (Patty), Jeff, and Robert. He is also survived by his brother Dick (Mary Lou) and several nieces and nephews. Funeral Mass will be held at 10:30 am, Monday, September 19, 2011 at St. Thomas the Apostle Catholic Church, 2312 E. Campbell Avenue, Phoenix.
The family requests contributions to Huger Mercy Living Center, 2345 W. Orangewood Avenue, Phoenix, AZ 85021 in lieu of flowers.