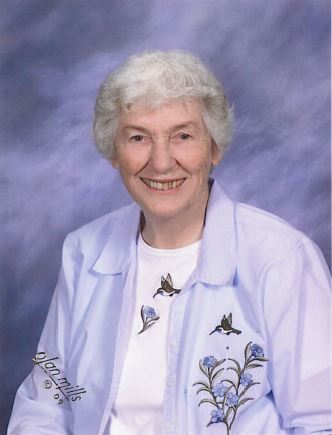 Margaret Ellen (Hetherington) Stewart left this world on her last great adventure on October 9, 2019 at 94, in Phoenix, Arizona. She was born in Los Angeles, California, November 8, 1924, to Ruth and Maurice Hetherington, both of pioneer Arizona families, and returned as an infant to spend her life in Arizona.
She graduated from North Phoenix High School, Phoenix Community College and Pomona College. She married her rancher husband, John William (Jack) Stewart, son of two pioneer Arizona families and lived on several central and northern Arizona ranches. They raised their four children, Nancy, John William (Bill), James Robert (Jimmy), and Marianne, until finally returning to Phoenix where Jack was affiliated with the Valley National Bank.
Margaret was a 75-year member of the P.E.O. sisterhood, serving as state president in 1991-2, she worked professionally as Director of Program Services with the Arizona Cactus Pine Girl Scout Council (formerly Maricopa County Council) for over 25 years. During her life on the ranch she started Girl Scouting in both Holbrook and Camp Verde. She was active in Church of the Beatitudes, Arizona First Families, Cattle growers auxiliary Cowbelles, and Maybes.
She loved to travel and took each of her grandchildren on a trip as well as her Girl Scout troops, visiting many sites on six continents. Many happy summers and holidays were spent at her family cabin at Iron Springs near Prescott.
She was preceded in death by her husband; Jack, her two older children; Nancy Snitzer and Bill Stewart, and is survived by her two younger children; Jim Stewart (Susan) and Marianne Stewart McCabe, her daughter-in-law; Vicki Stewart Merchant and son-in-law; Jim Snitzer, twelve grandchildren, nine great grandchildren and numerous nieces and nephews.
Memorial Service will be held on Friday, November 8, 2019 at 1:00 PM at The Beatitudes Campus, 1610 W. Glendale, Phoenix.

Offer Hugs From Home Condolence for the family of STEWART, MARGARET ELLEN (HETHERINGTON)