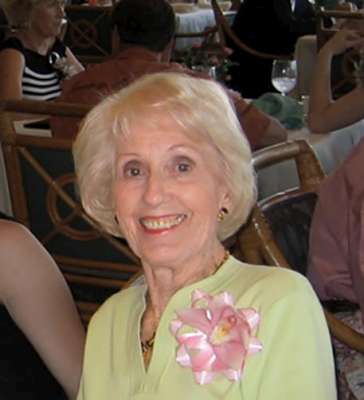 Bonnie Stirnweis, 97, passed away peacefully Thursday, August 27, 2015.  Bonnie was born to Swiss immigrants, Peter and Marie Bartschi, on February 27, 1918. She was delivered by her father on a houseboat on the Arkansas River and was raised in Ida, Arkansas, moved to Portland, Oregon with her family at age 18 and began a career in retail fashion and sales.  In 1949, she fell in love with Ted Stirnweis and they were married until his passing in 1990.  Bonnie shared Ted’s passion for golf and together they owned and operated Devil’s Lake Golf Course in Lincoln City, OR and Town & Country Golf Course and Cudia Park Driving Range after they moved to Phoenix in 1957.  Ted and Bonnie were lifelong members of Arizona Country Club.  Bonnie’s dedication to golf led to her winning both the Arizona Country Club championship and the Southwestern Ladies Invitational twice.  Bonnie was an active member of Valley Presbyterian Church since 1957. Bonnie was an extraordinarily loving and supportive mother to Linda (Patrick) Ryan and Nancy Snowden, and grandmother “Tutu” to Ryan (Lauren) Archer and Andi Archer, and was devoted to her stepson Shannon (Regina) Stirnweis and his children Kevin, Kirk and Eric. Bonnie’s boundless love and energy will be missed, but will live on in those whose lives she touched. A private service will be held at Valley Presbyterian Church.  Memorial gifts may be made to the Banner Alzheimer’s Foundation or Valley Presbyterian Church.

Offer Hugs From Home Condolence for the family of STIRNWEIS, BONNIE