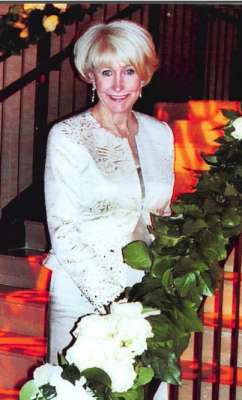 79, of Scottsdale, Arizona formerly of Winterset, Iowa passed away on Tuesday, January 14, 2014 after battling Parkinson’s Disease. She was born on September 2, 1934 to Mary-Elizabeth “Ting” and Herman Lewis. Along with siblings, Jim, Peg and younger sister Janet, the Lewis family shared  life in a small town where Dad ran the local drug store and Mom ran a household, in the same town the movie, The Bridges of Madison County was filmed. The Lewis Family moved to Arizona where Biz graduated from Arizona State College in 1956. She fondly remembers memories with  her sorority sisters from Gamma Phi Beta and attended reunions annually as the 1955-56 Past President. Biz became a caring mom of her four children and countless other children that called her Mrs. Mom when she would work as a Teacher’s Aide in the Madison Schools District.  Biz was completely devoted to helping others. Her warm, affectionate smile, charm, thoughtfulness, compassionate heart and grace made everyone at ease. Her humor was healing and hilarious! One was lucky to have the seat next to Biz. She dressed everyday with a  such sense of style and had impeccable taste. No one will replace her look and her outfits will truly be missed. Biz had two other loves, besides family and friends, CORONADO & CHRISTMAS! Coronado always held Biz’s heart and spirit. She lived there for a time and it was always a cherished place for her. Our family thanks the city of Coronado for taking such good care of Biz over the years. Christmas could not come and go with a scrumptious dinner and Christmas Eve PJ’s, for everyone, with Nana-Biz! Nana-Biz created a warm and loving home for the holidays. It was her favorite time of year.  Biz was a true friend to many and will be truly missed. She is preceded in death by her parents, Mary-Elizabeth and Herman Lewis, her son H.H., and her sister Peg Sudbrack. She is survived by her four children, Barry Stiteler of Phoenix, AZ, Doug Stiteler of Phoenix, AZ, Scott Stiteler of Belvedere, CA (Jane Stiteler) and Lizabeth Matthews of Scottsdale, AZ (John Matthews). Nana-Biz is also survived by nine grandchildren, Alison Stiteler, Brody Stiteler, Samantha Stiteler, Annie Matthews, Maggie Matthews, Payne Stiteler, Reagan Stiteler, Jack Stiteler and Henry Stiteler . Biz is survived by her siblings Jim Lewis of Scottsdale, AZ (Judy Lewis) Brother-in-law of deceased sister Peg Sudbrack (Bill Sudbrack) and Janet Miller of Phoenix, AZ (Robert Miller). Thank you to exceptional staff at Broomfield House, for their wonderful care and compassion. A Visitation will be held from 3:00-4:00pm, with a Memorial Service and Celebration of Life at 4:00pm., on Sunday, January 19, 2014 at Whitney & Murphy Funeral Home, 4800 E. Indian School Road, Phoenix, AZ 85018. In lieu of flowers, donations can be made to the www.navysealfoundation.org

Offer Hugs From Home Condolence for the family of STITELER, ELIZABETH “BIZ” (LEWIS)