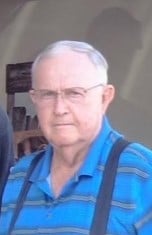 Phillip Shelby Stockton, 85, of Phoenix, passed away on Wednesday, August 25, 2021 peacefully in his sleep. Phil was raised on a dairy farm in Phoenix and it’s there that he learned to rope and ride. At the age of 16, Phil and partner won the team roping event at the Phoenix Rodeo. He was part of the 1st class at ASU to be granted a rodeo scholarship. Phil continued to rope and enjoyed riding horses his whole life. He was a member of the PRCA, RCA, Rancheros Vistadores and the 4Q’s. He was also a proud member of the Sheriff’s Posse here in Phoenix. Upon graduation Phil joined the Air Force where he eventually was honorably discharged as a Captain. While at ASU Phil met his bride to be Sue McCreary. Phil joined the McCreary family business, McCreary & Pew Wholesale and enjoyed a nice career there until retiring. Phil and Sue were married for 63 years until her passing this past December. One of his claims to fame was training and racing mules. At one point his mule Ace, was a world champion and had the title of the World’s Fastest Mule.
Phil is survived by his son, Eddie Stockton; daughters, Cindy Stockton and Christy (Al) Asta; 10 grandchildren; 7 great grandchildren; Brothers Terry Zook, Dennis Zook and Henry Stockton; and sister Cheryl Gammons.
A visitation will be held on Thursday, September 2, 2021, from 9AM to 11AM with a funeral service at 11AM at Whitney & Murphy Funeral Home, 4800 E. Indian School Rd., Phoenix.
For those unable to attend, the funeral service will be livestreamed at: www.Facebook.com/whitneymurphy
Interment with Military Honors to follow at 1:00PM at the National Memorial Cemetery of Arizona, 23029 N. Cave Creek Rd., Phoenix. Contributions in Phil’s memory may be made to AFCCA Foundation For Children at www.azfoundationforchildren.org

Offer Hugs From Home Condolence for the family of STOCKTON, PHILLIP SHELBY