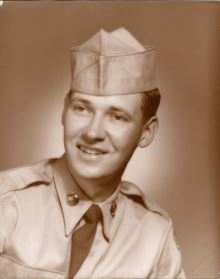 Edward Joseph Straneva, 85, died peacefully on August 17, 2018 in Phoenix, Arizona with his family by his side. Born February 7, 1933 in Ludlow, Pennsylvania to Katherine and Stephen Straneva, Ed was the youngest of seven. He attended Kane High School and served as a mechanic corporal in the US Army during the Korean War (1953-55). On June 28, 1958 Edward married his soulmate, Mary Madeline Slater (“Mid”), who he had known since childhood, at St. Anthony’s Catholic Church. Ed received an undergraduate in engineering and later a Master’s in Mechanical Engineering from his beloved Penn State University through the GI Bill. Ed was a very talented aerospace mechanical engineer and had a fulfilling 33-year career at LORD Corporation in Erie, PA. He was highly respected in his field and had the opportunity to travel internationally to Ireland, Brazil, France, and other foreign destinations. One of many achievements include being issued a patent based on his work with aircraft engine vibration control. To Ed, LORD was more than a job, as his co-workers were like family. Ed, Mid, and their family enjoyed boating on Lake Erie, camping at the Kinzua Dam, traveling across country and Europe to visit family, friends, and National Parks. Ed acted as an amazing father figure to many and the couple’s Erie home, which Ed designed and had built was vibrant, warm and devoted to their Catholic faith. They moved to Arizona in February 1996 to be closer to their children and grandchildren. They quickly became involved with their local parish, Corpus Christi, and were instrumental in the St. Vincent de Paul Society. Ed and Mid were married for 58 years and had an extraordinary love. Unfortunately, Mid suffered from dementia for many years and Ed was by her side as a devoted husband with an extraordinary will. He truly lived the vow “in sickness and in health.” Ed was preceded in death by his parents, siblings, and the love of his life Mary Madeline. He is survived by his daughter, Dr. Sally Kalpakoff (Jeffrey) and his son Michael (Mary); grandchildren Jennifer and Mary Kalpakoff, Anne, Ryan and Kate Straneva; and his greatgrandson, Andrew Kalpakoff. Visitation will be from 6:00 P.M. – 8:00 P.M. on August 29, 2018, with a Rosary at 7:00 P.M., at Whitney & Murphy Funeral Home, 4800 E. Indian School Road, Phoenix. A Funeral Mass will be at 10:00 A.M., August 30, 2018 at Corpus Christi Church, 3550 E. Knox Road, Phoenix. The family would like to thank Hospice of the Valley for their beautiful care. In lieu of flowers, please make donations to the Hospice of the Valley, 1510 E. Flower Street, Phoenix, AZ 85014.

Offer Hugs From Home Condolence for the family of STRANEVA, EDWARD JOSEPH