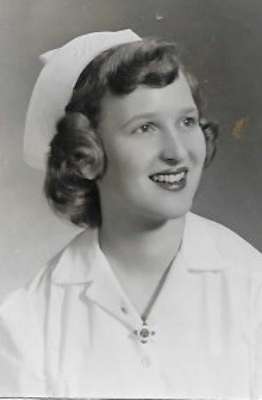 81, died on June 9, 2016 in Chandler, AZ.  She was born September 15, 1934 in Kane, Pennsylvania.  She was the oldest daughter of Lena and Louis Slater. Mary Madeline attended Sheffield High School and nurses training at St. Vincent where she received her RN degree.  On June 28, 1958, Madeline married Edward Joseph Straneva.  Madeline worked for the Visiting Nurses Association in Erie, PA for 20 years and helped establish one of the first hospices in the U.S.  Madeline enjoyed boating on Lake Erie, camping at the Kinzua Dam and across the country.  She and her husband Ed enjoyed several trips to Europe and Hawaii.  Madeline and Ed arrived in Arizona in February 1996 to be closer to their grandchildren. Madeline was preceded in death by her parents.  Madeline is survived by her three siblings, Louis Slater (Liz) of Sedona, John Slater of Tempe and Kathleen (Robert) Davis of Texas.  She is also survived by her husband, Edward, her daughter, Dr. Sally Kalpakoff (Jeffrey) and her son Michael (Mary), grandchildren Jennifer and Mary Kalpakoff, Anne, Ryan and Kate Straneva and her great-grandson, Andrew Kalpakoff.

Offer Hugs From Home Condolence for the family of STRANEVA, MARY MADELINE (SLATER)