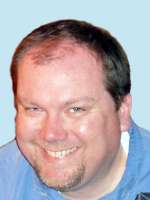 Joseph D. Strickland, loving husband, father, son, brother and friend, passed away on November 17, 2012. Joe is survived by his wife of 17 years, Julie Culver, son Roland, daughter Jolie, brother Ted, and parents Daniel and Maureen Strickland. He is preceded in death by his sister, Debbie. Joe was born on March 10, 1970, in Phoenix, Arizona. He attended Tavan, Ingleside and Arcadia High Schools. A few years after high school, Joe was set up on a blind date with his future bride, Julie. They married 2 years later. Joe graciously accepted Julie’s son into his life, and raised him as his own. Two years after marrying, Joe and Julie gave birth to their daughter, Jolie. Together, they built a great home and life in the Arcadia neighborhood where Joe grew up. Joe also took pride in his success in the business world. He handled a challenging career as Director at American Express with grace and confidence. Those who knew Joe remember his hearty laugh, his zest for life and his complete devotion to his family and friends. Please join us in celebrating the life of Joe Strickland, at 5pm on Wednesday, November 28, 2012, at Whitney & Murphy Funeral Home, 4800 East Indian School Road, Phoenix, AZ, 85018, (602) 840-5600. In lieu of flowers, the family asks that donations be made to the United Way, to carry on Joe’s spirit of generosity.

Offer Hugs From Home Condolence for the family of STRICKLAND, JOSEPH DANIEL