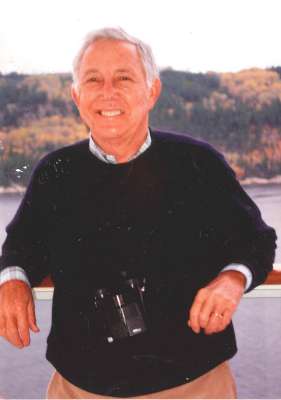 Charles Leonard Strouss Jr. died peacefully September 10, 2015 with his family at his bedside. Charles was a native of Phoenix, Arizona born July 31, 1927 to parents Lucille S. Akers of Longmont, Colorado and Charles L. Strouss Sr. of Saegertown, Pennsylvania. Charles L. Strouss Sr. was a founding member of one of Arizona’s oldest and most distinguished law firms Jennings Strouss & Salmon. Charles attended North High School where he played on the golf team, and Varsity football. He joined the United States Army at the young age of seventeen, to serve his country in WWII. He was a radio announcer and station manager for the armed forces radio in Pusan, Korea. After his honorable discharge and return stateside he attended and graduated from the University of Southern California where he pledged the Sigma Nu fraternity. He went on to receive his Juris Doctorate from the University of Arizona Law School. Charles followed in his father’s footsteps joining him at the firm of Jennings Strouss & Salmon, where he specialized in oil and gas, and municipal bond financing representing the State of Arizona among others. Charles was an avid golfer, playing since boyhood at the Phoenix Country Club where the Strouss family were members. He served as both board member, and President. He was an early member of the Phoenix Art Museum Men’s Council, was a Phoenix Chamber of Commerce Man of the Year, served on the Boys & Girls Club Board of Directors, the Board of Directors of the Catholic Newman Foundation, a Kiwanis club member, and Captain in the Army National Guard reserves.  Charles met the love of his life Barbara Kallcich, an American Airlines stewardess originally of San Francisco, on a flight she was working from Phoenix to San Francisco. They met again 2 days later on a return flight, and were married a year later. Charles and Barbara shared a love of travel, and dining seeing much of the world together.

Charles is survived by Barbara his wife of 55 years, daughters Julie, Nancy, Laurie and daughter in law Pam Moreno. He will be dearly missed by all that had the privilege to have known him. Funeral Mass will be held at 10:00 AM, Saturday, September 19, 2015 at St. Joseph Catholic Church, 11001 N. 40th Street, Phoenix. In lieu of flowers please make donations to the Charles L. Strouss Memorial Fund at the University of Arizona Law School.

Offer Hugs From Home Condolence for the family of STROUSS, CHARLES L. JR.