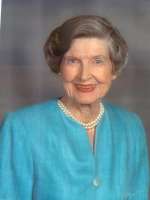 Marjorie Suggs, who has died at age 97, still had her Southern accent and its attendant charm when she was named Valley Leadership’s first Woman of the Year. That was in 1951, nineteen years after she arrived in Phoenix on the train from Alabama. A gracious storyteller with a twinkle in her eye and a genuine interest in others and their own stories, Marge (Mimi to her family) made it impossible for anyone to resent her for also nearly always being the prettiest person in the room.

Marjorie Wayne Smith was born in Shubuta, Miss., in 1915, the youngest of four children of Ruby Johnston Smith and Lewis Wiley Smith. When Marge was three years old, the family moved to Birmingham. There she grew up sleeping on sun porches, gamboling with her 22 first cousins, and learning the art of dinnertime storytelling from her grandfather.

At 16, Marge was a high school graduate with plans for college and dreams of a radio career in New York City, when her oldest brother was diagnosed with tuberculosis. He was sent to convalesce in the dry, desert air of Prescott. Marjorie and her mother traveled west to join him for the summer. By the fall, her brother’s health had not improved, and the family decided that Marge would stay in Phoenix to be near him. Crushed not to be returning to Alabama, she enrolled at Phoenix College, where her warmth and sense of fun drew many new friends to her. With no shortage of dates to local dances and parties, she quickly grew to know and love Phoenix. She particularly enjoyed riding horses along Central Avenue on what is now known as Murphy Bridle Path.

At one party, Marge met a student from the University of Arizona. She thought he seemed nice enough but dismissed him as being too old for her. A year or so later, they met again, and this time – fireworks. Marge, who had just turned 19, married Ernest Eugene Suggs soon afterwards. “And we really did live happily ever after,” she would say of their remarkable marriage. Ernie died in 1991.

With her quick wit and welcoming smile, Marge was a natural leader who readily served the growing Valley community. During the Second World War, she volunteered as a switchboard operator for the Red Cross and as a canteen worker for the USO at Phoenix’s Union Station. She served as President of the Junior League and delighted in participating in the radio program sponsored by the League on station KOY. She was Chairman of the women’s division of Red Feather, now United Way, served as Commissioner of the Girl Scouts,

co-chaired the first Visiting Nurse Service, now VNSA, book sale and especially enjoyed her many years as a member of The Board of Visitors. For 21 years, she also taught Sunday school to kindergarteners at Trinity Episcopal Cathedral. Her expert hospitality inevitably led to her successful careers at I. Magnin and Bullock’s, where many women relied on her for her sense of style.

Marge managed all this while raising a daughter, Diana, and then a son, Brian. She cherished her wide circle of friends and family, deeply adored Ernie, gave her grandchildren and great-grandchildren a steady supply of unconditional love, always had a changing stack of books next to her bed, never forgot a detail, liked to sleep late, kept adults and children alike happily enraptured with her stories of the South, and made the best chocolate meringue pie.

Marjorie will be remembered for the warmth of her welcome, the liveliness of her mind, and her absolute devotion to family and friends. She died February 6 of natural causes at Coronado Home of Hospice of the Valley, to which she had recently moved from her home at The Terraces. In addition to her beloved Ernie, she was predeceased by her brothers, Lewis Arista and Douglas, and by her sister, Edna Earle. She is survived by daughter Diana Ellis Smith (Paul) of Paradise Valley, son Brian Suggs (Susan) of Phoenix, six grandchildren, six great-granddaughters, three nephews, three grandsons-in-law, and three of her dear first cousins.

Offer Hugs From Home Condolence for the family of SUGGS, MARJORIE