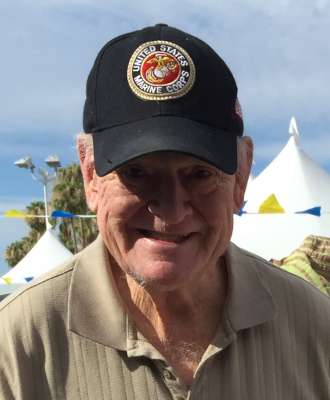 Robert G. Swan passed away peacefully at home in Phoenix, AZ on July 14, 2015. He was born in Phoenix, AZ on June 3, 1936. Bob was a lifelong Arizona resident. After he graduated from North High School where he starred for the State Championship Football team, he played football at Phoenix College and then earned a full-ride football scholarship at the University of New Mexico where he was a highly decorated football player back when they played “both ways.” After attending UNM, Bob joined the United States Marine Corp where he proudly served and was honorably discharged as a Captain in 1965. Although, according to Bob there is “no such thing as an x-marine”, he returned to civilian life earning a Masters of Education at Fresno state while also working as an Assistant Line Coach for Fresno State. He returned home to attend law school at the University of Arizona. After earning his law degree, he practiced law in Arizona for over 45 years.   While Bob was a well-respected attorney, his true passion was coaching girls fast pitch softball. Bob brought back the Phoenix Ramblers girls softball team in 1981. During his 30 years of coaching girls’ softball, he coached his teams to two National Championships, eighteen national appearances, four top ten finishes at the nationals and numerous state and regional titles. He aided more than 200 girls in earning college scholarships. During this time he was relentless in his pursuit of improved softball facilities ensuring Title IX was enforced for high school programs across the valley. He touched virtually every aspect of Women’s softball in Arizona working tirelessly to improve softball fields and increasing the caliber and organization of the sport. While he was honored to be inducted into the Arizona Softball Hall of fame in 2006, he was most proud of helping each player become her best. He came out of coaching retirement to coach women’s softball at Scottsdale Community College where the Artichokes beat Phoenix College for the first time in 35 years. Bob was a loving and attentive mentor to his daughters Katie, Jody, and Cammie; his son, Rob; his niece Dionne; and his grandchildren, Drew, Abby, Anthony, Cosimo, Ben, Santino, and Elena. Bob was a loving son to his parents Vera May and Vern and devoted brother to Linda and Don. Bob had a passion for life like no other and a kind and generous heart. A Celebration of Life will be held at 8:15 am, Thursday, July 23, 2015 at Papago Softball Complex, 6201 E. Oak Street, Phoenix, AZ 85008. A reception will follow at 9:30 am at the Arizona Country Club. All of his friends, family, teams, and fellow coaches are invited to attend. No doubt, the world is full of more colorful stories after Bob’s huge spirit touched it.

Offer Hugs From Home Condolence for the family of SWAN, ROBERT GENE