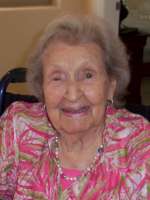 Louise Sweeney, 101, died August 5, 2013, in Phoenix, Arizona.  She was born September 12, 1911, in Alexandria, Virginia to Theodore and Minnie Fones.  Louise always spoke fondly of her years living in the Washington D.C. area.  After marrying Harold Thompson, they had one son, Harold “Tom” Thompson Jr.   Louise worked for over 20 years at PEPCO.  After Harold Sr. passed at an early age, Louise married Edward Sweeney. They enjoyed many years together, traveling, entertaining friends, relocating to several cities and states, and eventually making their final move to Phoenix, Arizona. Louise was known for her love of music, animals, gardening, and Jeopardy. She is survived by her stepson Barry Sweeney and his wife; 3 grandchildren, Jeanna Carlton, Lisa Pratt, Blaise Thompson and their spouses; and 5 great grandchildren. Louise was preceded in death by her parents; her husband Harold Thompson Sr.; her husband Edward Sweeney; her son Harold Thompson Jr.; and her 8 siblings.  Visitation will be held from 6:30-7:00pm with a Funeral Service at 7:00pm on Friday, August 9, 2013 at Whitney & Murphy, 4800 E. Indian School Road in Phoenix.  Interment will be held at 10:00am on Saturday, August 10, 2013, at St. Francis Catholic Cemetery, 2033 N. 48th Street, Phoenix.   In lieu of flowers, donations may be sent to Hospice of the Valley, 1510 E. Flower Street, Phoenix, 85014 or to the Arizona Humane Society, 9226 N. 13th Avenue, Phoenix, 85021.

Offer Hugs From Home Condolence for the family of SWEENEY, LOUISE F.