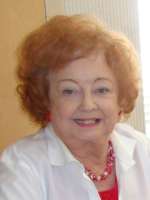 March 7, 1928 – May 5, 2011
June Morris Szalay, 83, beloved wife of Steve, passed away peacefully on Thursday, May 5, 2011. June was born in Akron, Ohio. She attended Garfield High School, graduated from Kenmore High School, and Hammel Business College in Akron. She worked for B.F. Goodrich Tire Company and in 1947 was crowned “Miss B. F. Goodrich”. She always claimed her “15 minutes of fame” came early. Prior to National Cash Register (NCR) introducing the check issuing machine to B. F. Goodrich, all employees of the huge company were paid in cash on payday. June was selected to be a part of this major change in the way business was conducted.
Married to Stephen Joseph Szalay on February 7, 1948 at St. Mary’s Catholic Church in Akron, June and her husband spent two years in the Air Force, being stationed in Texas and ultimately at Luke Air Force base in Arizona. When they finally returned to Akron, and the snow was up over the windows that winter, it was June who made the inquiries on what it would take to move back to the “Valley of the Sun”. They moved to Phoenix permanently in 1954.
June became very active in the community. The first organization that she joined was the Phoenix Junior Woman’s Club. She also was a long time member of Amigas de Amore (A de A), the oldest woman’s club in Phoenix, the Arizona Air National Guard’s Copper Comets, Scottsdale Girls Club, The Phoenix Symphony Guild, where she is most remembered for her beautiful and unique decorations for the once prestigious Symphony Ball. She also belonged to St. Theresa Catholic Church Sodality, the Crozier Dinner Committee, and was a supporter of St. Vincent de Paul. A member of the Phoenix Christ Child Society up until her death, she received their “Our Hero” award in 2010.
June was very creative, artistic and shared her many talents with the organizations to which she belonged. She formed many lifelong friendships through her involvement and friendliness. She was a wonderful cook and party hostess. She is best known by her friends for her fabulous homemade pies and the beautifully decorated scrapbooks she has been making for well over 30 years.
She was blessed with three children and four grandchildren, who refer to her as “Miggie”. She will be deeply missed by her family and friends. June is preceded in death by her parents Christopher Morris and Olga “Peggy” Eder Morris and her brother, Richard Walter Morris, who was killed in World War II. June is survived by Stephen Joseph Szalay, her devoted husband of 63 years, and her children Cathie Szalay Broten, Steven M. Szalay and Michelle Szalay Chappell (Jim), and her grandchildren Melissa Broten, Christopher, Stephen and Carlee Chappell, and sisters Shirley Hutz and Flora Speck of Akron, Ohio.
A Vigil service to celebrate June’s life will be held on Tuesday, May 10 at 6 pm with visitation to follow until 8:30 pm at Whitney & Murphy Funeral Home, 4800 E. Indian School Road, Phoenix. Funeral Mass will be on Wednesday, May 11, at 10:30 am at St. Theresa Catholic Church, 5045 E. Thomas Road. Interment will be private at St. Francis Catholic Cemetery. In lieu of flowers, June wished for donations to be made to the Christ Child Society of Phoenix, Mt. Claret Retreat Center, or the St. Theresa Perpetual Fund.

Offer Hugs From Home Condolence for the family of SZALAY, JUNE MORRIS