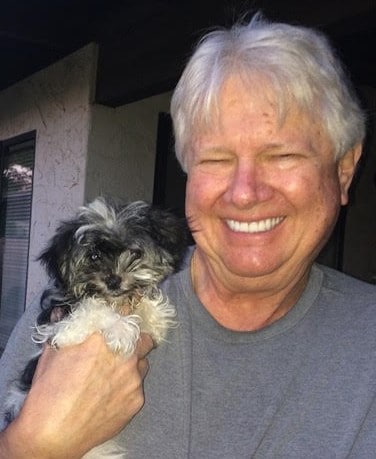 Steven Mark Szalay was born on May 18, 1954 in Laredo, Texas. His family lived in Laredo while his father was in flight training for the U.S. Air Force. A year later the family moved to Phoenix, Arizona where Steven would grow up. Steven attended Hopi Elementary School from first through eighth grades and graduated from Arcadia High School as part of the Class of 1972. He graduated from Arizona State University with honors with a Bachelor of Science degree in Communications Technology in 1976. While attending ASU he was the president of ZBT Fraternity, Gamma Tau Chapter.

Steven was retired at the time of his death. He had owned and operated Direct Audio/Video Productions for over 15 years, creating videos for personal and corporate use, including a novelty VHS video he invented in the 80’s called the “Portable Aquarium” which displayed the calming visual of a tropical fish aquarium for the television (the equivalent of today’s computer screen saver). He also worked as a radio station engineer and served as Secretary/Treasurer for the Society of Broadcast Engineers in Phoenix.

Steven had a creative mind, always trying to invent something new. He read and researched everything and had an incredible recall of all kinds of interesting facts. He took flying lessons, water skied, liked fast cars and played the guitar from grade school on. He always loved music and spent time playing in bands in his youth. He had a world class guitar collection and collected unusual boxes. He was always up on the latest technology and was who you would call to set it up. He loved animals, especially his dogs and cats. He loved his nieces and nephews. He enjoyed making a production out of presenting a special gift at the holidays. He loved Italian food and always requested German Chocolate cake for his birthday.

He was a kind and witty soul whose life was taken too soon by Covid-19 on February 1, 2021. He was preceded in death by his parents, June Marcene Morris Szalay and Stephen Joseph Szalay. He leaves a sister Cathie Broten and niece Melissa Durgin (Joey) and great nephews Logan and Brandon of Midland, Texas. He also leaves his sister Michelle Chappell (Jim) of Phoenix, Arizona and nephews Christopher Chappell of Seattle, Washington, Stephen Chappell of Phoenix, Arizona and niece Carlee Chappell of Pasadena, California.

Steven was loved and will be missed by his family and friends. No services are planned until it is safe to gather. Condolences may be expressed at www.whitneymurphyfuneralhome.com

Offer Hugs From Home Condolence for the family of SZALAY, STEVEN MARK