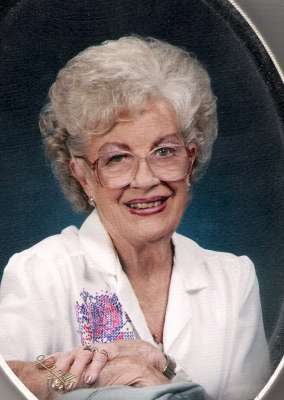 Jelean Tabeek, 84, of Phoenix, died peacefully in her sleep on September 18, 2014.  Born in North Hollywood, CA on June 13, 1930 to William and Irene Pierce, she was a musical prodigy on violin and piano, performing by age 5.  She attended North Hollywood High and was a “babysitter to the stars.”  She met the love of her life, Amin Charles Tabeek in 1947 and they were married four years later on the day after her 22nd birthday.  They settled in central Phoenix where they raised six children.  Once her kids were all in school, she started attending classes at ASU where she earned her Masters Degree in Special Education.  She taught Special Education for the Osborn School District in Phoenix for several years, and eventually retired to travel with Charlie and pursue her love of all things “crafty”.  She is preceded in death by her husband of 49 years, Amin ‘Charlie’ Tabeek.  She is survived by her six children, Gail Luck, Gwen Scaggairi, Theresa (Ed) Woudenberg, Jana (Dennis) Ronan, Michael (Jolene) Tabeek, and Brian Tabeek.  She also leaves behind eight grandchildren and 17 great grandchildren.  She will be sorely missed by all, but she is now together with Charlie again and they are no doubt “dancing up a storm” in heaven.

Visitation and rosary will be on Friday, September 26, 2014 from 6:00-8:00pm 1ith a rosary at 7:00pm at Whitney & Murphy Funeral Home, 4800 E. Indian School Rd., Phoenix.  Funeral Mass will be celebrated Saturday, September 27 at 11am at St. Gregory Catholic Church, 3440 N. 18th Avenue, Phoenix.  Interment will immediately follow at St. Francis Cemetery, 2033 N. 48th Street, Phoenix.  There will be a reception for family and friends at Whitney & Murphy Funeral Home after the proceedings.  In lieu of flowers, people are invited to donate with Mass cards or to Hospice of the Valley.

Offer Hugs From Home Condolence for the family of TABEEK, JELEAN