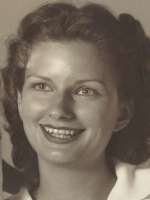 Mary Jean (Korte) Tanner (“Grammie”), 89, has joined her beloved husband, Ray, and moved home to be with the Lord on May 12. She died peacefully while surrounded by many of the family and friends she was so deeply committed to. Mary Jean was born in New Albany, Indiana on December 23, 1922 to Raymond and Mary Catherine Korte who have preceded her in death. She was the second of two siblings. Her older brother, Raymond Korte, Jr., of Ray Korte Chevrolet, also preceded her in death.

In 1939, her family moved to Phoenix where she attended and graduated from Phoenix Union High School in 1940. That same year she met the love of her life, Raymond R. Tanner, Sr. at a dance at Luke Air Force Base (then called Luke Field) where he was a Captain and a flight instructor. Prior to graduating from Phoenix College, Mary Jean exercised many of the leadership skills she developed as an Eaglet Girl Scout while growing up. She was very proud to serve as President of the women’s Phoenix College Student Body and also of the Kappa Delta Nu sorority. In 1942, she and Ray married in Brophy Chapel. Before his death in 2001, Ray was a respected businessman in Phoenix and was President and CEO of Ray Tanner Volvo.

Throughout her life, Mary Jean continued her commitment to a life of service. She was an active member of Saint Francis Xavier Parish for over 55 years where she served in mother’s clubs at Saint Francis, Brophy and Xavier. She was also a Eucharistic Minister and ardent supporter of the Cursillo Center after participating in the very first English speaking Cursillo for women in Phoenix. Mary Jean was also an eager participant in St. Joseph’s Hospital Women’s Auxiliary and the Holy Family Retreat Association.

There is no question that the Tanner universe revolved around Mary Jean. She was everyone’s wise counselor; the one you talked to about marriage (no engagement was official until Grammie had given her blessing!), your troubles, school or work. She was also the one you took your prayer petitions to and knew that she would hold your needs in constant prayer. Grammie solved more problems and eased more burdens through patience, tolerance, late night chats and unconditional love (perhaps with a touch of ice cream!) than any psychiatrist ever could. When you spoke to Grammie, she was completely engaged in what you had to say and you knew you were the most important person in the world to her at that moment.

Many significant family gatherings where held at her home and her parties (for every conceivable milestone) were legendary. For those that were fortunate enough to know her, Mary Jean was a spiritual, kind and generous friend who touched many, many lives. She was an eternal optimist who could find the good in any circumstance and a wonderful listener who was always more interested in hearing what was happening in your life rather than sharing about her own. She managed to make everyone feel comfortable in her presence and went out of her way to laugh at every joke or clever remark – no matter how bad. Grammie was particularly fond of her Scarem – a group of friends from her childhood in Indiana, her Cursillo group and her supper club friends. Above all of her many cherished friendships and community endeavors; she was rooted in and most proud of being an accomplished wife, homemaker, mother, grandmother and great-grandmother.

For Mary Jean, heaven on earth was the beautiful family cabin in Payson that she and Ray built and where every possible moment was spent with the family. It was at the cabin that many life lessons were learned and lifetime bonds were strengthened between family and friends. This is where she felt closest to God and family and where, no doubt, Mary Jean and Ray are now sitting on the swing listening to the soothing sounds of the East Verde River.

The family is eternally grateful for the kind, gentle and loving care she received from her caregivers while residing in her home and living at Sun Valley Assisted Living Homes during her long illness. Hospice of the Valley also played a supportive roll during this time. 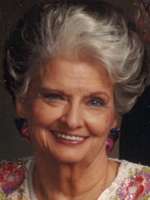 Offer Hugs From Home Condolence for the family of TANNER, MARY JEAN (KORTE)