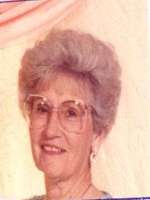 93 years, died peacefully on December 19, 2011. She was born in New York City to George and Mary Lavender on September 27, 1918. After graduating from St. Barnabas High School, she attended secretarial school and then worked at Sherman Ellis Advertising Agency in NYC where she met her husband of 66 years, Marshall Taylor. After marrying in 1941, and settling in the Bronx, Georgine soon had the first two of their six children. Moving west in 1947, Central Phoenix became home, and Georgine gave birth to three more children in five years. Soon thereafter, Georgine returned to work for KPHO Radio and Television as its prized receptionist. The children loved going to the station to pick up Mom, for they were often able to observe TV shows being aired, including their favorite, “Wallace and Ladmo”. A very proud moment for Georgine came as she and Marshall joined St. Thomas the Apostle Catholic Church as founding members. Here, she was very active with the St. Thomas Ladies Sodality, helping to publish a monthly newsletter, preparing food for those in need and keeping the alter linens sparkling clean. Following the birth of her sixth child, Georgine became a stay at home Mom. Ultimately, she was re-employed as a manager in the Credit Department of Sears, where she worked until her retirement in 1985. Georgine was a wonderful cook and Sunday dinners with the entire family, including both grandmothers, were always special. The Taylor home glowed on holidays, as Georgine was an avid decorator with adornments and trimmings in every nook and cranny. Another fond memory of these times is the aroma of traditional holiday cookies baked by the dozens. Georgine and Marshall loved to travel; the highlight of their many trips was to Oberammagau, Bavaria. Georgine was a sweet, caring, hard-working and dedicated woman of strong faith, who was very proud of her family. She loved attending everything in which her children were involved and a favorite was attending sporting events. In 1998 Georgine was diagnosed with Alzheimers. The disease robbed her of many of the joys she so deserved to experience in the last years of life. Georgine was predeceased by Marshall in 2008 and by daughter Bobbie in 1972. She is survived by five children: Sue (Rex) Schmid, Gena (Harry) Bonsall, Buster (Angela) Taylor, Bette Taylor, and Tony (Leslie) Taylor. Georgine loved her ten grandchildren and would have been tickled to know she had nine great-grandchildren, with two others due to be born, soon. Her children gratefully acknowledge the extraordinary care given to their mother by Hospice of the Valley and by the staff of Audrey’s Adult Care Home. Private family services to be held on January 7th.

Offer Hugs From Home Condolence for the family of TAYLOR, GEORGINE M.