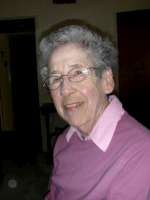 Dolores Marie (Bennett) Thal, Dodie to her friends, passed away peacefully on Thursday night February 7, 2013. She was surrounded by family at her passing. Dolores was born in East Saint Louis, Illinois in 1918. Her grandfather and father ran a well-known restaurant and saloon known for their fresh fish sandwiches. As a young woman, she was delighted to see people as diverse as the old St. Louis Cardinals baseball team’s “Gashouse Gang” and August A. Busch, frequent the establishment. Later on, this young dark haired beauty met a handsome young sailor, named Walter, from across the river in St. Louis. They fell in love, and were married in 1941. It was a love affair that lasted more than 70 years. Walter preceded her in death in August 2012. Following Walter’s 20-year Navy career and government service, they settled in Glendale, Arizona in 1958. Dolores and Walter were both active in the Catholic Church at Our Lady or Perpetual Help (OLPH) and at St. Mary’s High School. At OLPH, she was the director of the Saturday religious classes for children attending public schools, called CCD. She did this lovingly for over 10 years. She played Bridge with her women friends from the church for over 40 years. Rumor has it that money occasionally changed hands! Through all their military moves and two wars, they raised four boys, Michael, Alex (Maggie), Jim (Tanya) and Tom (Penny), daughter-in-law Karen, many grandchildren, great grandchildren and two great-great grandchildren. Along with her husband Wally, her family gave her much joy. She was a loving wife, mother and friend. RIP Dodie. A Memorial Mass will be held at 12 Noon, Saturday, February 23, at St. Paul Catholic Church (in the Chapel), 330 W. Coral Gables Drive. In lieu of flowers, donations to Hospice of the Valley are suggested.

Offer Hugs From Home Condolence for the family of THAL, DOLORES MARIE